The Boston Celtics fell to the Philadelphia 76ers 107-93 in Game 1 of the 2019-2020 NBA season. The Celtics and 76ers played an ugly, foul-filled rock fight that sucked the excitement of opening night right out of the building. Ben Simmons led Philly with 24 points, eight rebounds, and nine assists, while Joel Embiid added 15 points. Gordon Hayward led the Celtics with 25 points, while Jayson Tatum added 21 points and 10 rebounds. Kemba Walker had a tough debut, scoring just 12 points on 4-18 shooting. The Celtics missed 14 free throws and just looked unprepared for the bright lights of national TV. 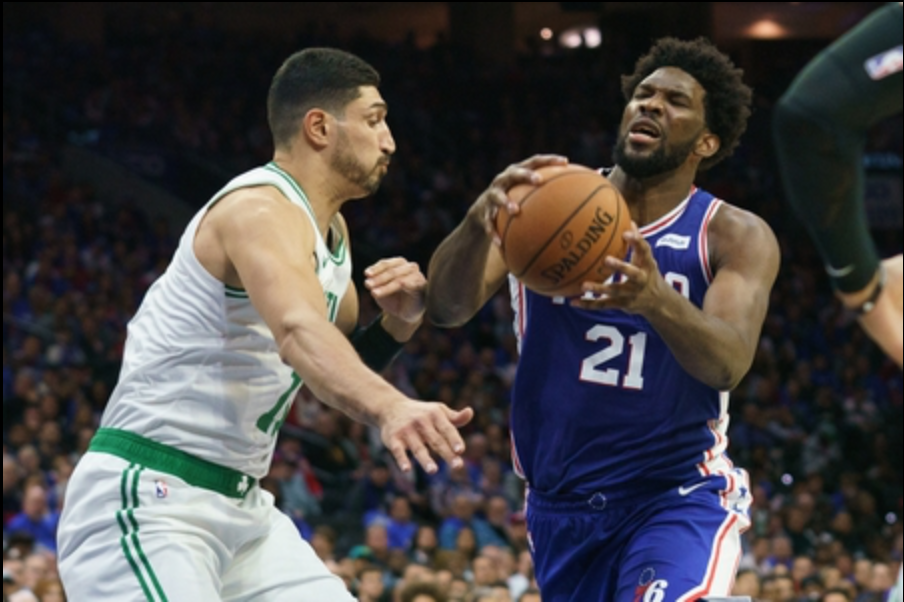 This one hurt to start the night:

After starting Daniel Theis for two out of four preseason games, Brad Stevens switched things up on opening night and added new addition Enes Kanter to the group. Kanter's defense has always been an issue, but he is certainly strong enough to bang with Embiid in the post.

Theis comes in with Embiid on the bench. That's a tough matchup for him, obviously. But Horford goes right to the post on Theis for a bucket.

Boston's size, a glaring weakness to start the season, was on display early on, but not in the way you might think. Early on you could tell that there was an emphasis on gang rebounding. On every Philly miss, there were at least three Celtics back on the defensive glass to secure the board.

Neither team was particularly crisp to start the game. Through the first six minutes both teams were shooting under 45 percent from the floor. Jaylen Brown was very aggressive on defense and came up with a few deflections and a steal, which led to an and-1 layup. A lot of Boston's offense was coming from the perimeter, something that isn't ideal but definitely understandable given Philly's size on the interior.

It wasn't pretty by any means, but the C's were able to gut out a 25-20 lead after the first quarter. Two stats that led to the early lead, limiting their own turnovers (1) and Philly's offensive rebounds (3). It also didn't hurt that Tatum knocked down two threes late in the quarter.

Foul trouble started to become a real issue for the C's early in the second quarter. Brown picked up his third and fourth fouls (yes, you read that right) in the first few minutes, and Hayward and Walker both picked up two in the first quarter.

Jaylen Brown now with four fouls 15 minutes into this thing and Brad Wanamaker will come off the bench for his first minutes of the season. Now Robert Williams too. The Celtics are playing just about everyone.

Despite going much deeper into his bench this quickly into the game, Stevens and Co. were able to maintain their lead halfway through the second thanks to a few more shots dropping and a renewed defensive intensity. Robert Williams III also did this:

After holding off the 76ers for most of the half, a few missed defensive rotations and some ugly offensive possessions allowed Philly to gain a 1-point lead 49-48 heading into the halftime break. Walker was able to get some things going on the offensive end, including knocking down a three and crossing up 76ers rookie Matisse Thybulle en route to a three-point play. He was also having an impact off the court in a way that these young Celtics haven't seen in a while.

Kemba Walker mic'd up says to Jayson Tatum "Stay aggressive. I don't care how many shots you take Jay!"

That's a different message for Tatum to hear compared to last year.

The fouls continued to pile up against Boston in the second half, with Hayward, Kanter, and Brown each picking one up in the first two minutes of the quarter. Philly took advantage of all the fouls to the tune of an 13-2 run to open up their largest lead of the game 62-50. With Brown on the bench in foul trouble, the Celtics just couldn't get enough offense going to keep pace with a rejuvenated 76ers team that looked completely different coming out of half time.

The Boston defense in the first half was definitely good, but Philly was also missing a lot of makable shots. To start the third quarter, a few more of those shots started to fall, and the 76ers were able to build a lead. Philly did much of their damage with Embiid on the bench after taking an errant elbow to the mouth from Brown. Al Horford really showed his value as someone who can carry the load while Embiid rests during this stretch.

Despite a lackluster start to the quarter, a few big buckets from Tatum and Hayward brought the C's back into it. Tatum had a pretty poor shooting night up until this point (6-18), but a corner three and a coast-to-coast and-1 layup got him into a bit of a groove that the Boston offense certainly needed. While Boston was making a comeback, they weren't doing any favors for themselves at the charity stripe.

Fans in Philly have now won a free Frosty AND a free small fry this quarter because the Celtics hate making free throws.

After cutting the Philly lead to as few as three points, a couple free throws from Josh Richardson and a backdoor layup from Mike Scott extended the lead back out to nine heading into the final frame.

A 13-2 start to the third quarter set the tone for the #Sixers to take control and now lead the #Celtics 77-68 going into the fourth quarter.

While the Celtics were continuing to shoot themselves in the foot with missed free throws, Philly was doing their best to kept the Celtics in it with fouls and turnovers. Embiid picked up his fifth foul early in the fourth quarter, and Boston was able to get to the rim a bit easier, cutting the lead down to four with just over nine minutes to play. Walker continued to struggle in his Boston debut, shooting a Kyrie-like 3-15 from the field to this point. The scoring tandem of Tatum and Hayward along with Marcus Smart Smarfing all over the place kept the C's within striking distance coming down the stretch.

But just like that, back-to-back threes from Philly stretched the lead back out to double digits.

After Philly extended the lead, the Celtics didn't have much of an answer. The offense looked disjointed and unfamiliar, and Simmons was dicing them up on the defensive end. Boston never got the lead below 10, and Philly rolled to an easy victory.