Unprecedented Marksmanship in a Spaced-out NBA 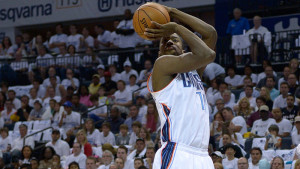 In Hoops Hierarchy, the most elite pure shooters are the 40-50-90 guys – those whose accuracy exceeds 40 percent from the three-point Arc, 50 percent on overall Field Goal attempts, and 90 percent at the free-throw line.

But the NBA’s most reliable shooters – as measured by overall Field Goal Percentage – have been crossing the 60 percent barrier rather consistently now for more than 50 years … even some players who have struggled mightily with the seemingly simpler foul shot, e.g. DeAndre Jordan, Dwight Howard, Shaq, Wilt (who was the first “qualified” player to attain the standard for a full season back in 1967).

Technically, there were nine players prior to Wilt who’d reached the .600 level in FG% for a “season,” but none played more than seven games and 49 minutes nor took more than 13 shots. Included on that list is a man named Tommy Kearns who played but seven minutes of one game and connected on his lone shot for the Syracuse Nationals in October of 1958. 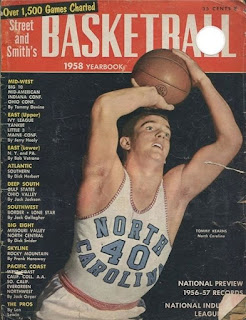 Mr. Kearns is noteworthy for two reasons. First, he was the starting point guard for the North Carolina Tar Heels – coached by Frank McGuire (who would later “coach” Chamberlain to a 100-point pro game) – who defeated Wilt’s Kansas Jayhawks for the 1957 NCAA championship … the 6’2” Kearns legendarily “jumped” against The Big Guy on the opening tip-off.

And Tommy Kearns is the only NBA player to have retired with a perfect 1.000 FG% -- one-for-one.

In now 73 seasons of play, an NBA (nee BAA) player has posted a FG% of .600 or better on 393 separate occasions, representing 275 different players, 15 of them Boston Celtics (the most recent being young Robert Williams just last season, with an impressive .706 rate).

Naturally, a good many of these “accomplishments” were, like Kearns’s and our Rob’s, the result of an extraordinarily small sample size … and can be readily dismissed as fluky.

When we limit consideration only to players who participated in a minimum of 40 games during a season, the total number of such accomplishments shrivels to 156, representing 77 ballplayers who’ve reached .600 in a season’s worth of FG shooting. This list includes six shooting percentages that exceed the 70 percent mark … and while Wilt Chamberlain’s .727 accuracy for 1972-73 is recognized by the league as the best FG shooting season in its history, it’s not the Big Dipper’s name that sits atop this list. 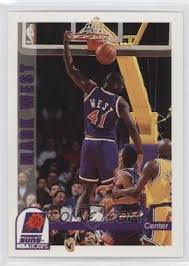 On the other hand, DeAndre Jordan has eclipsed .600 from the floor in 11 different seasons, Tyson Chandler in nine. Artis Gilmore represents the Old School with six .600 seasons; Mark West the under-appreciated role player with his five. The diverse quartet of Bo Outlaw, Erick Dampier, Dwight Howard and Rudy Gobert can each claim four such stellar seasons. (Wilt, same as Ryan Hollins, Javale McGee and nine other players, own three “60’s.”)

Now, not all of this precision shooting is recognized by the Authorities. In order to gain inclusion among a season’s official NBA leaders in FG%, a player must tally a minimum of 300 successful shots from the field. That’s what’s preventing Hollins from supplanting Chamberlain on the leaderboard.

Only 30 “qualified” players have ever shot .600 or better from the field for a full season, 18 of them one-hit wonders. There have been only a grand total of 56 “official” sightings of an NBA player connecting on at last three out of five shots over the course of a full season.

Officially, both Jordan and Gilmore are credited with six .600 seasons and Howard with four. Wilt, Shaq, Clint Capela and Steve Johnson of the ‘80’s Kings each shot so well during three separate campaigns.

Here are the all-time best ever “qualified” shooting seasons: 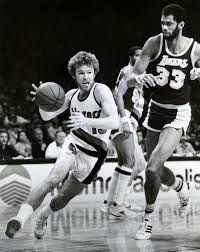 Considering the player names that have arisen during this little ramble through NBA history, you likely are wondering “Where are the little guys?” Essentially, the answer is Non-existent – the shortest players in the “Qualified 60% Club” are Montrezl Harrell, Buck Williams and current C’s radio voice Cedric Maxwell, all listed at 6’8”.

Ironically, the second man ever (after Big Wilt, of course) to shoot 60% (.612, to be exact) in at least 40 games (74, to be exact) was a backcourt man back in the very first season of play following the “merger” with the old ABA (1976-77, to be exact). His exact name in Dave Twardzik from Dr. Jack Ramsay’s title-winning Trail Blazers, a four-year vet of the Virginia Squires of that ol’ ABA. (BTW, the only other member of this “club” with any ABA roots is Gilmore.)

You’ll be hard-pressed, though, to find the name of any “wing” player, much less a “guard,” on the membership list of this little club. You will find a Boban (twice), a Birdman, old friend Amir Johnson and a couple of Plumlees … but no Kyries, Hardens or even a J. R. Smith.

Over the past five seasons, nine different “qualified” players – Steven Adams, Thomas Bryant, Capela, Gobert, Harrell, Howard, Jordan, McGee and Hassan Whiteside – have posted a seasonal shooting rate above .600 at least once. That’s 30 percent of all the players ever to have done it.

Realistically, the type of player who tends to excel in this statistical area is not a high-volume shooter nor a team’s primary scoring option – more likely he’s a scrappy, opportunistic “garbageman” sort of player … hardly the guy hastening to spot up at the three-point stripe.

“Hardly,” that is, unless your name happens to be Thomas Bryant and you play for the Washington Wizards.

Young Mr. Bryant, who turned all of 22 last month, this season gave Coach Scott Brooks about 20 minutes, 10 points and six boards while connecting on better than four of his seven shots a night in his 72 appearances. 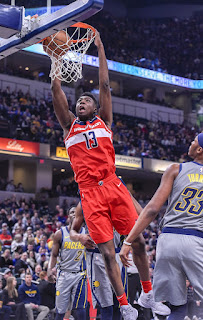 But what sets TB apart from the crowd of extra-high-percentage shooters in the league is his willingness to shoot the three-ball.

On the other 55 occasions when a “qualified” player has reached the .600 threshold, those 29 guys combined to take 105 three-point shots, making a measly ten.

It’s questionable as to whether Thomas Bryant is providing us a peek at the next stage in the evolution of the “Efficient NBA Player” – or will become just a flashy footnote in NBA lore, like Twardzik’s old teammate Billy Ray Bates.

Alas, with his background, the poor kid may already be destined to a career as a “journeyman” – born in up-state New York; went to high school in West Virginia before spending two seasons in Bloomington, Indiana; and now has resided on both coasts in a two-year pro career.

Howsoever it may happen to work out, it appears I have a new set of numbers to keep track of this season … just what I need!