Report: Kyrie Irving's and Kevin Durant's plans to team up were made prior to 2018/19 season 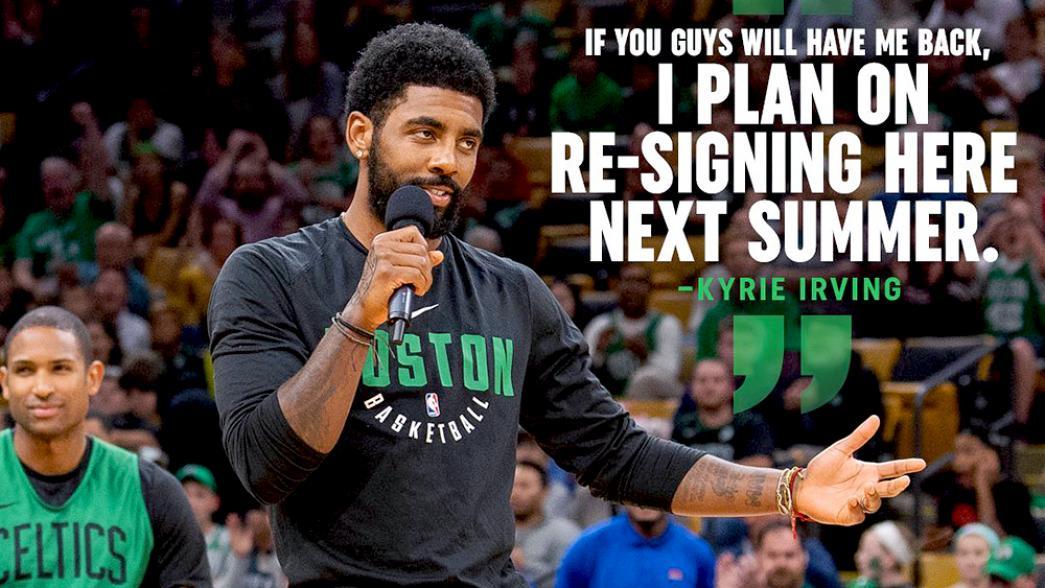 I guess Kyrie's quote really should have been," If you guys will have me back and sign-and-trade for Kevin Durant (like the Nets just did), I plan on re-signing here next summer." At least according to today's report that Irving and Durant had made their plans to team up prior to last season,

A friendship had blossomed between Kevin Durant and Kyrie Irving, two towering basketball talents, and that friendship had spawned a vague plan: Let's team up.

Maybe in New York. Or Brooklyn. Perhaps in Boston, if things went well in Irving's second season with the Celtics. The city was TBD. The goal was clear.

Durant and Irving were going to play together, somewhere, in 2019. That's what they resolved over a series of conversations before this season even began, according to knowledgeable sources.

A couple things to keep in mind, whenever you hear Kyrie apologists say, "Well Celtics fans didn't want him back!" make sure to let them know they are being misleading. Celtics fans 100% wanted Kyrie to re-sign... until he went back on his word and kept the team hostage waiting for him to decide come summer. Also know that if Kyrie wanted to come back and he wanted to play with Kevin Durant, Danny Ainge would have gladly arranged a sign-and-trade for KD like then Nets just did.

Durant almost signed with Boston when he was a free agent three summers ago. He would have loved to join hi bff Kyrie in Boston. And the Celtics still would have had a stacked supporting cast of four of Horford, Tatum, Hayward, Brown and Smart.

Reality is Irving poisoned the well for Durant to want to come here. He did the same with Anthony Davis. The Cavs at least were able to trade him and get something. Unfortuantely the Celtics got played.

"Home is where my heart is. And it’s always been there.” 🔥

-Kyrie is ready to start his journey in Brooklyn. (via kyrieirving/IG) pic.twitter.com/Rdayjwpx8x


Related: Is Kyrie Irving the most despised former Celtic player of all time?
Kevin Durant will join Kyrie Irving on the Brooklyn Nets