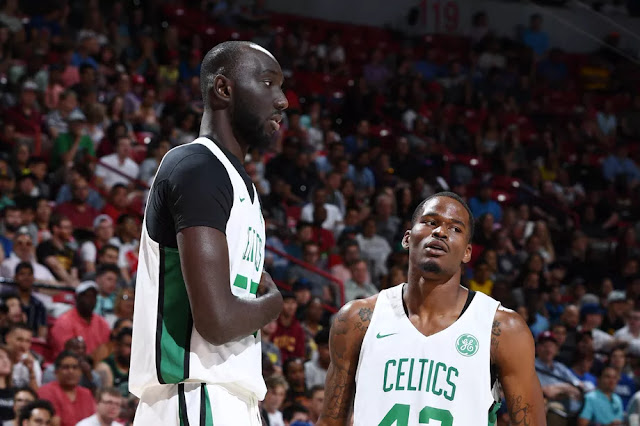 The Boston Celtics announced today that they have officially signed four of their Summer League players.

Tremont Waters and Max Strus were signed to two-way contracts, allowing them to compete for both the Celtics and the Maine Red Claws this season. Fan favorite Tacko Fall and Javonte Green were also signed, but the terms of the deals were undisclosed.

The Boston Celtics have signed guards Tremont Waters and Max Strus to two-way contracts, and have signed center Tacko Fall and guard Javonte Green, the team announced today. Per team policy, terms of the deals were not disclosed.


The Celtics can have up to 20 players on their training camp roster, but will need to whittle that number down to 15 for the start of the season, not counting their two spots for 2-way players. The roster currently stands at 16 players with the addition of Fall and Green.

NBA cap expert Keith Smith states that a source has indicated that Fall's deal is the Exhibit 10 contract discussed after the draft, and Green's deal is partially guaranteed:


Per a source: Javonte Green has a partial guarantee with Boston. Tacko Fall's contract is an Exhibit 10 contract.
An Exhibit 10 deal is fully non-guaranteed and can be converted to a Two-Way contract down the line. It can also be converted to a one-year standard contract as well.
— Keith Smith (@KeithSmithNBA) July 25, 2019

Neither Fall nor Green can sign with another team unless they are waived by Boston:


As of the moment, neither Fall nor Green can sign with another team. If/when they are waived from these deals, they will be FAs. But Boston will have what is called Affiliate Player rights, should the two choose to sign with the NBAGL. That would get them assigned to Maine. https://t.co/qz5he7flBE
— Keith Smith (@KeithSmithNBA) July 25, 2019