UPDATE: A look at the Atlantic Division post-free agency day 2


The Atlantic Division of the Eastern Conference in the NBA has vastly changed since 6 p.m. on June 30. Let’s take a look at how it has shaken out. 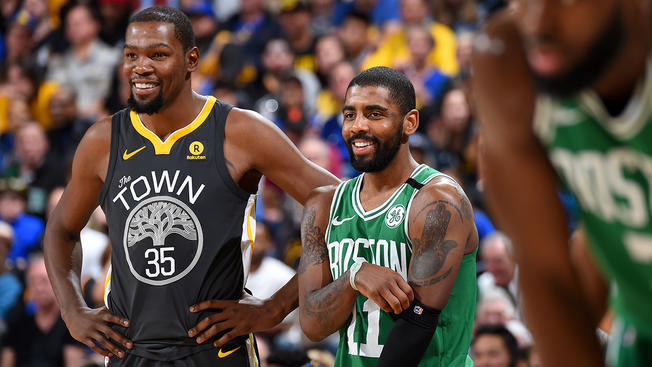 Kemba is a big get for the Celtics, he will provide a viable replacement for Boston who lost two guards on day 1. The Celtics have found their starting center in Kanter with the mid-level exception, he cleans the offensive glass which is something the C's have been in dire need of in recent years.

The Celtics biggest loss here is Al Horford, there was hope a three-way sign-and-trade would come to fruition that would allow them to re-sign him, but he ended up taking more money elsewhere. You cannot blame him for that, it’s tough that it’s a division rival, however.

At this moment, it is unclear what the package Boston will receive in return on the sign-and-trade will be.

This was a massively successful day for the Nets. Adrian Wojnarowski of ESPN reported that Irving and Jordan were willing to take less money in order to give Jordan the full mid-level exception of around $10 million a year.

Free agents Kevin Durant and Kyrie Irving are taking less than the max to allow DeAndre Jordan to get the $10M annual salary with Brooklyn, league sources tell ESPN.

They are sending Russell to the Golden State Warriors alongside Napier and Graham in a sign-and-trade, according to Wojnarowski.

Golden State and Brooklyn have agreed on a sign-and-trade, sending D’Angelo Russell to the Warriors on a four-year, $117M maximum contract, league sources tell ESPN.

The deal will include Josh Richardson to the 76ers, league sources tell ESPN. https://t.co/nWFrg00mtm

The Sixers struck gold in the Jimmy Butler sign-and-trade with the Miami Heat that fetched them Justin Richardson. However, according to Jared Weiss of The Athletic, the original trade involving the Dallas Mavericks is essentially dead. They had to find a new trade partner, well partners, as they agreed to a four-team deal with the Los Angeles Clippers and Portland Trail Blazers, according to Wojnarowski.

There is a “glitch” in the Butler-Richardson trade according to sources, as the Heat do not want to give up Derrick Jones and Dallas is telling people the deal is off. Expectation is that the deal is too far down the road to fall apart and will get ironed out.

Jimmy Butler deal is complete with Heat -- with Clippers added as a fourth-team in trade that also includes Philadelphia and Portland, league sources tell @ZachLowe_NBA and me.

They also added a big piece to put next to Joel Embiid in Al Horford, the man with the gorgeous eyes. Philadelphia will have an extremely strong team to take into next year.

They lost Butler to Miami but were able to retain Tobias Harris, so all is not lost. However, Butler was the player to take over for them in the playoffs last year so they will need to replace that role going forward.

This team is sitting and waiting for Kawhi’s decision, which reportedly is not coming for a couple days at least.

The Raptors have added Matt Thomas, from Spain's Valencia, according to Shams Charania of The Athletic.

The Knicks reached for the stars but landed on a power forward from New Orleans not named Zion Williamson. Their free agency performance even prompted a message from the front office. Sheesh.

But hey, according to Peter Vecsey, they have this in the works I guess?