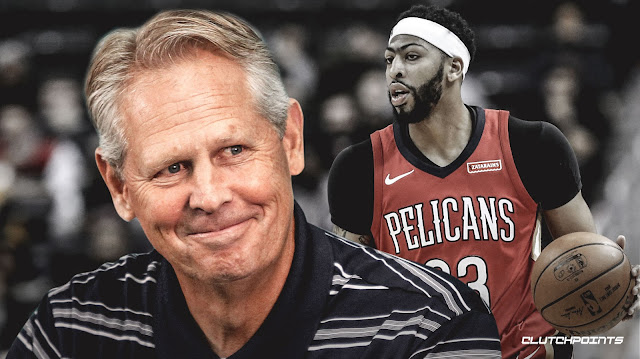 With a tumultuous season behind him, Boston Celtics President of Basketball Operations Danny Ainge finds himself in a boat without a paddle. Or does he have a paddle we don't know about?

As it stands right now, while no official word has been given, Kyrie Irving looks all but Brooklyn-bound, much to the delight of some Bostonians and the chagrin of countless others. As far as I'm concerned, his signing with ROC Nation sealed that fate. This means Danny Ainge will no longer be pursuing Anthony Davis, right? Wrong. The New Orleans Pelicans superstar will soon be traded, most likely to the team him and his crew have been driving him to for months: the Los Angeles Lakers.

Unless Danny intervenes and comes up with the biggest block of his career by offering Pelicans newly anointed GM -- and former Cleveland Cavaliers GM -- David Griffin the assets he deems fair in exchange for the unibrow-wielding All-Star.

One-year rental be damned, Ainge has had his eyes set on Davis for years. And word out of Boston is that he's going all-in, Kyrie or no Kyrie.

Per Adam Himmelsbach of the Boston Globe:


...the likelihood of an Irving return appears to be decreasing. Nevertheless, the sources said, it is clear that the Celtics’ pursuit of Davis will push forward.


While some would say perhaps AD could stay, allow me to remind you of what Rich Paul, his agent, had to say to Sports Illustrated just the other day:

They can trade for him, but it'll be for one year. I mean: if the Celtics traded for Anthony Davis, we would go there...and we would go into free agency in 2020. I've stated that to them. But in the event that he decides to walk away and you give away assets? Don't blame Rich Paul.


A stern warning to some, water off the back to Ainge. This is one of many reasons I love Danny: the guy's got stones. But while he's aggressive -- and undeterred -- the question is if it's all worth it?

The answer is "yes, but..." -- that "but" being the size of the very arena the Celtics call home.

Does Danny trade promising young talent like Jaylen Brown, Jayson Tatum, and others + his cherished draft picks for one year of a man who doesn't want to be there, whose family don't want him there, and who will be on the first flight from Logan to LAX when the 2019-2020 season concludes? If Kyrie was committed to Boston, Danny pulls that trigger without hesitation. But with confidence in Irving staying dwindling, the decision is even harder.

So, why would Danny even consider going down this rocky road?

Is it to gamble and hope to come up big like the Toronto Raptors just did, even if just for a year?

Is it because Celtics owner Wyc Grousbeck told Boston Herald's Mark Murphy that he doesn't "have any interest in being mediocre" and would "rather go for it" than sit back?

Is it a Hail Mary to keep Kyrie and hope AD will reconsider his position, just like Kevin Garnett did back in 2007?

Is it to deny Lebron James the teammate he covets and desperately needs, simultaneously preventing the King from adding a gem to his crown -- and to the larger crown of the castle he now resides in?

I say yes -- to all of the above. Because knowing Danny, he's got something up his sleeve -- and something tells me it's a really big paddle. He didn't get the nickname "Trader Danny" by accident, after all.

Stay tuned. It's about to get crazy, one way or another.