Warriors come back to win Game 5, but lose Kevin Durant to an Achilles injury 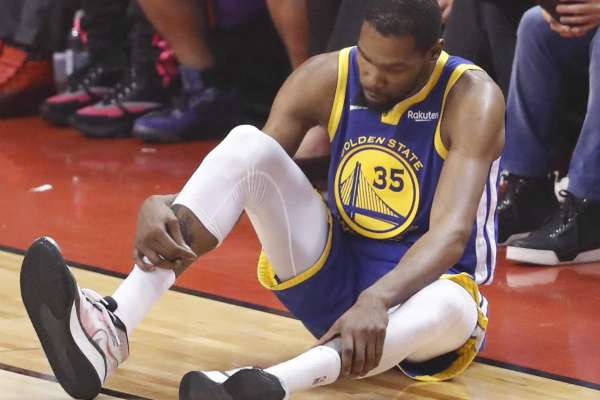 Kevin Durant made his return to the Warriors line-up tonight from a calf injury suffered against the Rockets, but went down with a much worse Achilles injury in the 1st half. He'll have a MRI, but this is a pretty big deal for this series and for several teams in the NBA. Decent chance Durant opts in to the final season of his contract and doesn't become a free agent now until 2020. Would be rather unheard of if the Knicks offered him a max contract if he has a torn Achilles, but they are the Knicks. The Knicks will now likely try to trade everything they have for Anthony Davis and try and pair him with Kyrie Irving.

Irving probably becomes more likely to choose Brooklyn now, as the Knicks without Durant are a lot less desirable. I guess the chances of Irving re-signing with Boston also increase if the Celtics trade for Anthony Davis (since Irving would then not have either Durant or AD as a running mate in either New York or Brooklyn.

Hopefully Durant has a full recovery.


Bob Myers holds back emotion as he shares that KD's injury is to his Achilles. He does not yet know the severity. pic.twitter.com/uhAbcpQ4Qv
— NBA on TNT (@NBAonTNT) June 11, 2019