Reports: Celtics to pursue Enes Kanter and Kevon Looney, out on Clint Capella 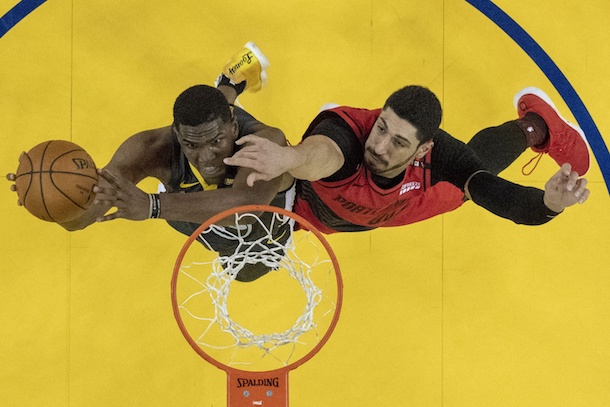 Celtics don't have much momentum in landing Clint Capela via some sort of trade (for example, as the third team in a Philly-Houston deal). League source on whether Celtics are close: "No." Are they still trying? "No."
— Mark Murphy (@Murf56) June 29, 2019

My feeling has always been that the Clint Capella option was only in play if the Celtics weren't using their cap space to sign a max player. With the news that the Celtics and Kemba Walker are basically a done deal, Boston being out on Capella makes sense.

So who will be our starting center? Beggars can't be choosers when you only have the room exception. The long term answer may have to be addressed further down the road or via trade, but the Celtics will reportedly be throwing their hat in the ring with the suitors for Enes Kanter and Kevon Looney.

The Boston Celtics are targeting a pair of bigs with their room exception, and two of those bigs include Portland Trail Blazers center Enes Kanter and Golden State Warriors big man Kevon Looney, according to the Athletic’s Shams Charania.

As Lakers & Clippers fight over Kawhi, I’m told they’re also interested in Enes Kanter. Boston wants him too. He’ll be a valuable big for a contender.

Would be very surprised if Looney doesn't get an offer from another team way north of the room exception. The Celtics main pitch would be, "Hey we're a big man away from being a contender. You would be that big man. You'd have a starting position and a major role."

Related: Per Woj: Latest update on Kemba - on the way to the Celtics at $141 million/4 years
If Boston lands Kemba, could Nerlens Noel be an option?