The Warriors coach, Steve Kerr, said it best after the Raptors eliminated his team to take the Championship. When describing Toronto's play in the Finals, he used the phrases "great defensively", "share the ball", "play a beautiful style", "great 2-way players" and "veteran players". Steve may just as well have just been describing the Celtics Al Horford. 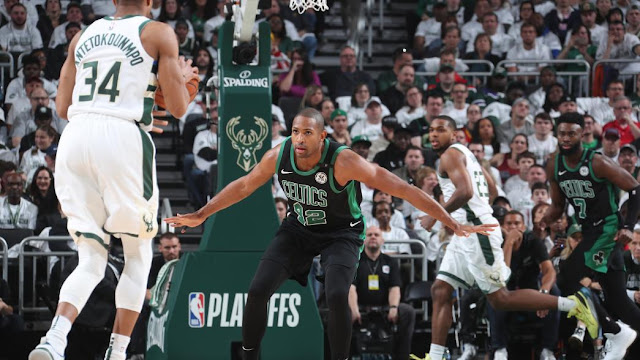 Today's NBA players seem to think the grass is greener elsewhere, and General Managers often think other players are better than their own. Danny Ainge shouldn't think that way when it comes to Horford. Last season was tumultuous and vastly disappointing, but Al just went about his business quietly and efficiently. He is just the stable, talented veteran Boston needs right now.

Lol Al Horford in the back knew he was lying the whole time https://t.co/yLgWnRiNLR

With Kyrie Irving all but out the door, signing Horford to at least a 1-and-1 (two years, second being player option) contract should be a priority. Let's face it - next years Title is up for grabs. Both Kevin Durant (Achilles) and Klay Thompson (ACL) will be out of action next season, and both are free agents. The brilliant Kawhi Leonard is not totally locked into the Raptors for next season. The Rockets look to be going into a partial rebuild.

The Raptors this season were everything I wanted (and envisioned) the Celtics to be. Everyone buying into their roles and stepping up when called for by the moment. The team in the East to be able to break the Warriors’ dynasty.

Danny can't fool around on this one. Horford's decision date on his player option comes four days from now (June 18), two days prior to the NBA draft. An opt-out and re-signing should already be an all-but-done deal. We really can't refer to Al as the Dominating Dominican because that is not his game or his manner, but his veteran leadership, stability, size and talent are what the Celtics need right now. Do it, Danny!