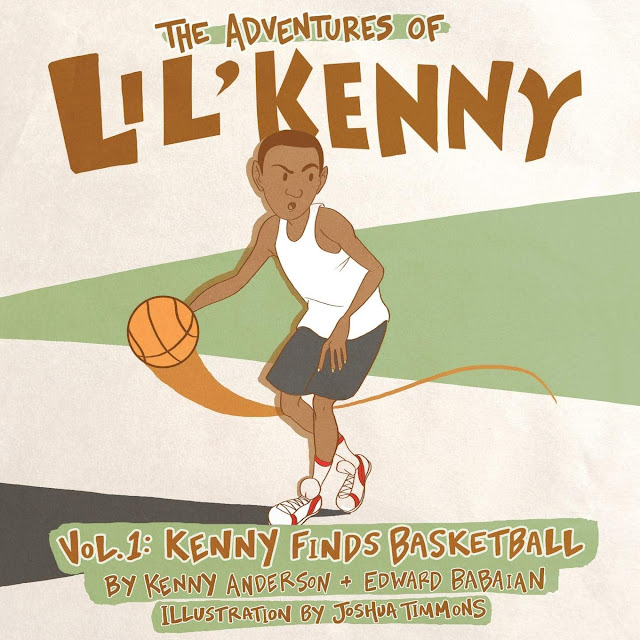 Fandom to friendship, authorship to published. This is a true story of how I befriended former Boston Celtics point guard and NYC hoops legend Kenny Anderson, and how our friendship turned into the launch of a 7-part children's book series that tells the tale of Kenny's childhood -- The Adventures of Lil' Kenny.

As a die-hard Celtics fan and LA native (that's another story for another day), I've never needed an excuse to cruise through the desert and across Nevada's state line. But when the NBA pinned the Celtics versus our arch nemesis, the Los Angeles Lakers, for a Summer League matchup, my arrival in Sin City was a foregone conclusion.

After the game which saw Celtics young phenom Jayson Tatum drop 27 points en route to a comeback victory, my friend and I decided to hit the Wynn for a drink or two. As we waited for the bar hostess to seat us, my friend tapped my shoulder. "Hey, man, check it out." he said. I looked up and saw a 6'10" frame comfortably seated. It was none other than former Celtics forward Walter McCarty.

At that time, Walter was one of Brad Stevens' assistants; he was also the Summer League squad's head coach. Smoking a victory cigar a la the beloved Cs patriarch, Red Auerbach, McCarty blew smoke in the air while chatting it up with Celtics beat writer Marc D'Amico and a few others. Naturally, I wanted to meet him. But I didn't want to be "that guy."

Thankfully, he looked up in my direction. He spotted my vintage '84-'85 Celtics championship t-shirt, nodding with approval. "Hey, Walter," I said. "I'm a big fan - you think it would be cool if I come shake your hand?" "Yeah, of course," the current University of Evansville men's coach replied. I walked to his table which was only about 6-feet away from mine. We exchanged pleasantries, along with a story of how my dad would yell, "I love Walter too!" each time Celtics' legend/color commentator Tommy Heinsohn would famously exclaim "I looooove Waltaaaaaah!" whenever Walter would make a big play.

Not wanting to overstay my welcome, I went back to sit with my friend. A few minutes later, after lighting a cigar of my own, I heard Walter call over to me, asking if I was "smoking an Avo," referring to the cigars made by Avo Uvezian. Turns out Big Walt, when he wasn't coaching, was quite the cigar connoisseur. I mean, he was able to identify my cigar merely by catching a whiff in the casino air. Impressive.

A simple question about my smoke of choice led to one of the coolest moments in my life -- sitting with Walter McCarty, talking about the Celtics while having a cigar. Red would've been proud. I know my dad was.

Now, right about now, you're probably asking: what's this got to do with Kenny and kid's books? Well, I'm glad you asked. You see, the next day I followed Walter on Twitter. I sent him a note thanking him for his time and for being so cool with me, a random fan. Around lunch that day is when the dominoes really began to fall -- in a good way.

As it turns out, Walter wasn't the only cigar lover on the 2002 Celtics roster. Kenny Anderson, aka Mr. Chibbs, aka NYC Point God, was too. Over the next several weeks post-Vegas, I would see Walter and Kenny tweeting at each other, asking one another what cigar they were going to smoke that day.

As a big fan of Kenny's pre- and during his Celtics run, I wanted to introduce myself. After all, he was one of my favorite players.

THE INTRODUCTION
One day, Kenny tweeted out a picture of himself having a smoke. So, I decided to reply.

What followed was a series of tweets, DMs, and eventually texts and calls with the former #2 overall pick in the 1991 NBA Draft.

One of those calls was to invite me to Boston to catch a game against the Knicks, followed by a small cigar event he was having for his cigar club -- the My Guy Cigar Club. I gladly accepted and booked my flight to Boston. The night before the game, I ventured to "the spot," where Kenny's event would take place the following evening - Stanza Dei Sigari in the North End. I tweeted at Kenny and Walter to let them know I was in town. While Kenny was still in route, Walter was around the corner. Minutes later, there I was, re-creating my Vegas encounter with Big Walt, only in his backyard. 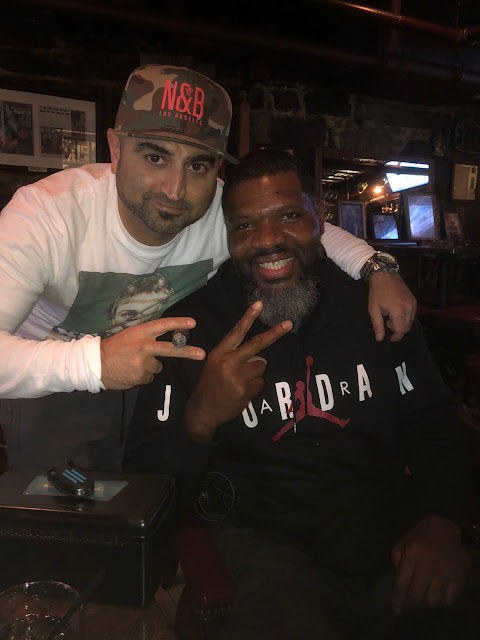 IS THIS REALLY HAPPENING?
The next morning, Kenny reached out to see what I was up to. I should preface this by saying, prior to my arrival, Kenny and I spoke of shooting some hoops together. Well, he's a man of his word. One minute I'm drinking some Dunkin' coffee, the next I'm in Boston University, playing H.O.R.S.E. with one of the greatest point guards the basketball world has ever seen.

After our game, we ventured off to Watertown, MA. for, you guessed it, a cigar. While enjoying a stick from the My Father collection, Kenny and I chatted up about life, both mine and his. As he autographed one of his jerseys for me, we spoke of many other topics, including my father who introduced me to basketball -- and to the Celtics. I told Kenny how much my dad loved watching him play. I even told him about his illness. He responded with genuine care and a heartfelt, "I'll be praying for him."

Shortly thereafter, Kenny received a phone call. After hanging up, he said, "Walt's on his way." I played it cool, but inside I was like, "what the hell is happening here? A few months ago I was in Vegas to see the Celtics play, now I'm in Boston having a cigar with Kenny after shooting hoops with him? And Walter McCarty is on his way too?" Freaking pinch me, man. That's what I felt. That's what I still feel. 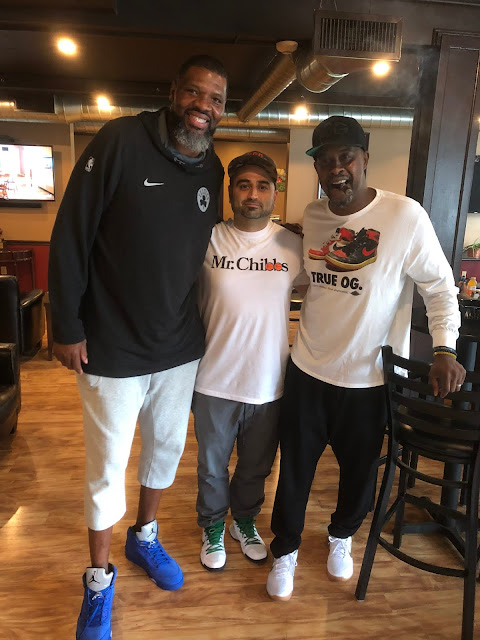 The three of us. I'm the short one.

So, Walt joined us and we all smoked. As the two former teammates took the opportunity to catch up, I happily sat back, chiming in every once in a while. Soon thereafter, we all parted ways to get ready for the evening's festivities -- watching the Celtics smash the New York Knicks in TD Garden, 110-89. Post-game celebrations were held at the aforementioned North End cigar shop where there the air was filled with as much laughter as smoke. 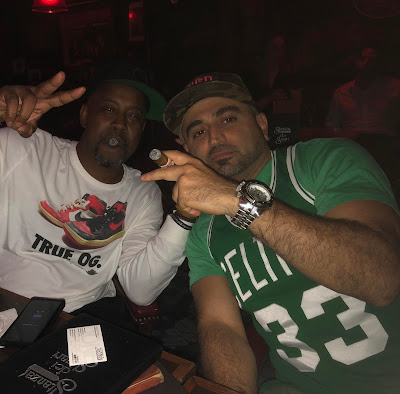 Kenny and me enjoying his night in the North End. 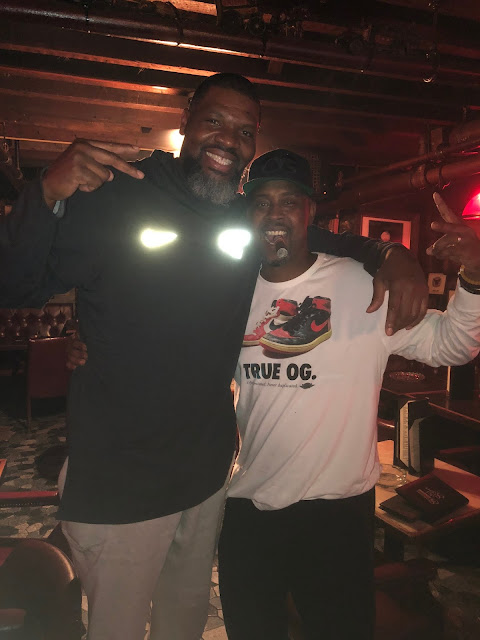 Former Celtics teammates, both pivotal in one of the greatest comebacks in ECF history.

BACK TO REALITY
After getting back to LA, while at work, I received a phone call. It was Kenny. "My guy, just wanted to make sure you got back home OK. You good?" he asked. I was floored. I mean, I had spent enough time with him to know he's as sincere as they come, but I wasn't expecting this. I also wasn't expecting this friendship to turn into a business venture. But it did.

While chatting one day in mid-2018, Kenny asked me what I was up to. I responded by telling him about new developments in my copywriting career. I also let him know I was working on a children's book series. He was very encouraging, saying, "that's awesome, my guy. Good luck with that."

What followed is what prompted all of this.

"I always wanted to write a kid's book about my life, my childhood in Lefrak," Kenny said.

I leaped at the opportunity.

The next day, we hopped on the phone and he proceeded to tell me how he discovered basketball. That his sister would take him to the park to get away from the dangers of his neighborhood. And one day, while his sister sat on the bleachers, she handed him (all of 7 or 8 at the time) a basketball. At first, he chucked the ball towards the basket, barely drawing iron. But before he knew it, like a duck to water, he started hitting shot after shot. He was a natural.

Fast-forward several months and the first book in the 7-part series is out in the world. A true labor of love between a fan (now friend) and one of the all-time greats. It's a fairy tale story, only it's not fiction. 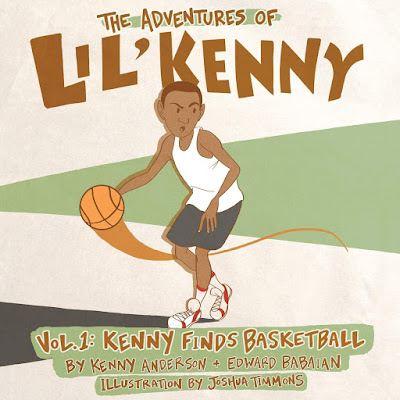 Each book in the series not only tells Kenny's adventures of basketball, but also teaches children a valuable life lesson -- like practice, discipline, commitment, teamwork, and more. Kenny's goal is to give back -- to help everyone he can. That's why he's the Head Coach of the Fisk University Men's Bulldogs in Nashville. It's why he's on the blacktop coaching his son every chance he gets. It's why we wrote these books. It's not a cliche -- Kenny just wants to do good, giving back to everyone he can, however he can.

THE ADVENTURE CONTINUES
Well, that's my story. What started as a friendly tweet turned into a real friendship. One that had me sitting in Kenny's Florida home, watching his alma mater Georgia Tech Yellow Jackets play on ESPN before we headed to his garage for a post-game cigar break.

Kenny generously gifted me with a pair of his actual game shorts.


It became the kind of relationship that had Kenny calling to console me after he learned my father had passed. One that saw me frantically contacting his wife and best friend after hearing Kenny had suffered a stroke several months ago. Ya know, the way real friends do.

Thankfully, Kenny is doing great these days. Following doctor's orders he's back to his jovial, happy-go-lucky self, tweeting "good morning" along with motivational quotes and scriptures on a daily.

They say never meet your heroes - but I'm glad I did. And it's one of the greatest things that's ever happened to me.

Special thanks to Kenny for his friendship and for the opportunity to go on this ride with him. To my father (who's undoubtedly smiling from above), who I've dedicated this book to. To the unbelievably supportive, loving families and friends of both Kenny and me who cheered us on along the way. To Walter McCarty. To everyone who has already purchased the book, and for those who plan to do so. Last but not least, special shoutout to CelticsLife alum and Celtics Wire writer, Justin "Dr. J" Quinn for spreading the good word with his USA Today article. Thank you all.

HOW TO GET THE BOOK
Available via Amazon or e-book.