We mostly remember Joe Johnson as one of the good ones that got away - actually he was sent away via trade in his rookie season in Boston. Iso Joe was known primarily, as you can tell by the nickname, as a scorer - and a good one. Apparently, he still is. He won Player of the Week for his performance on the BIG3's opening weekend, scoring 27 points, along with 16 boards and four assists in Sunday's game. 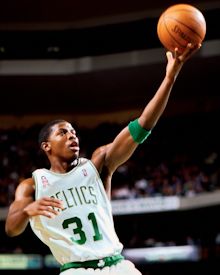 Congrats to Joe Johnson for being named BIG3 Player of the Week! Iso Joe was doing it all on Sunday, finishing with 27 PTS, 16 REB, 4 AST and the game winning basket 👏👏👏 #BIG3onCBS pic.twitter.com/PRjnQISVhL

After being traded by Boston, Johnson went on to become a seven-time All-Star. He is joined on the BIG3 Triplets by another former Celtic, Al Jefferson who was the key piece sent to Minnesota by Boston to acquire Kevin Garnett.