The Boston Celtics have selected the little guy with their 33rd overall pick.

Of course, I mean Carsen Edwards, the diminutive scoring point guard out of Purdue, so you can be forgiven if you thought I mean THE Little Guy, Isaiah Thomas, but they don't just share position and size in common.

Edwards, who can hit from damn near anywhere on the court when left open -- and often when not -- has a propensity for getting buckets in a way the Cs desperately need with much of their top-tier talent on the hoof. 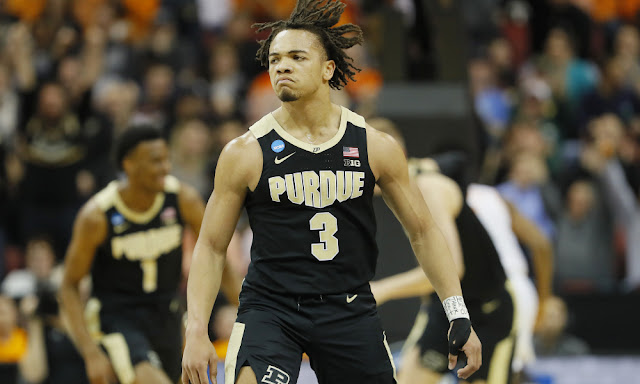 While Edwards' stature may be a defensive issue (this sounds...strangely familiar), and his lack of explosiveness and average first step (OK, not so much) likely means he'll never be much better than a mid-level starter on his best day, the tools are there for a blistering backup point guard with a probable super-sixth man ceiling.

While many Cs fans were hoping for a Bol Bol pick this late in the draft, particularly given second-round picks do not need to be guaranteed, this is a solid pick for a team in the midst of a partial rebuild.