All mascots are NOT created equal – nor should they be?

In the annals of professional basketball, the Celtic “brand,” green shamrock and all, dates back 105 years to the establishment of the – take a deep breath, my friends – New York Celtics. The squad existed through the onset of World War II, competing in a couple of regional leagues but primarily barnstorming. Among the standouts who dotted the roster you’ll find Dutch Dehnert, Nat Holman and Joe Lapchick (whose 29-year coaching career turned St. John’s University into a hoops powerhouse – at least until a shady cat named Jarvis came along).

The geographical association with the Big Apple was quickly abandoned, and history has come to dub that entity the Original Celtics.

Legend contends that it was long-time C’s publicist Howie McHugh who initially proposed the moniker to head honcho Walter Brown, who took an immediate liking.

Some are confusing, like the Clippers – should I be picturing a debutante’s ball at the yacht club, or some barber’s convention?

There’s even one that makes perfect sense – but kinda by accident. The NBA’s Michigan-based franchise has always been named after the thrusting mechanism of an automobile’s engine … perfectly befitting a team based in the Motor City, right?

Except the name “Pistons” traveled with the franchise in 1957 from a little podunk town in Indiana where they were known as the Fort Wayne Zollner Pistons. The primary business of owner Fred Zollner was – you guessed it! – the manufacturing of auto parts. 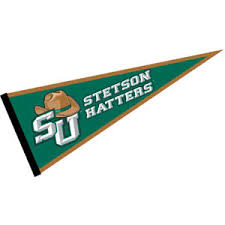 On the other hand, inter-collegiate athletics does provide us with some clever and aesthetically appealing appellations. Take Dr. Quinn’s favorites from across the state line there in Storrs – the UConn / Yukon Huskies. It invites a neat little play-on-words while also referencing a surprisingly athletic breed of canine – I know first-hand.

The college logo that most tickles my fancy hails from Central Florida’s Stetson University, known far and wide as the Hatters – the only thing that could make it better would be if the school took a page from the Pistons’ playbook and re-located to Texas.

Several seasons ago, a DI hoop coach patrolled his sideline for an entire game without shoes or socks … the Dad of occasional Celtic R. J. Hunter was raising awareness and funding for an overseas charitable trip he was to make the following summer.

Coach Ron Hunter’s publicity stunt was one of the rare occasions in recent memory when the IUPUI Jaguars have received any media coverage.

Would their public image be elevated if they were to begin calling their competitive teams the Palindromes? It would surely give them the nation’s most intimidating Debaters, huh?