Boston's 123-116 loss to Milwaukee last night was a tough one. It has become obvious that the Celtics weaknesses that we saw in the regular season have become magnified in the post-season. One of those is the lack of cohesiveness that would bring all of the guys in green together for the same game. There is one bright spot - and that is Jaylen Brown. 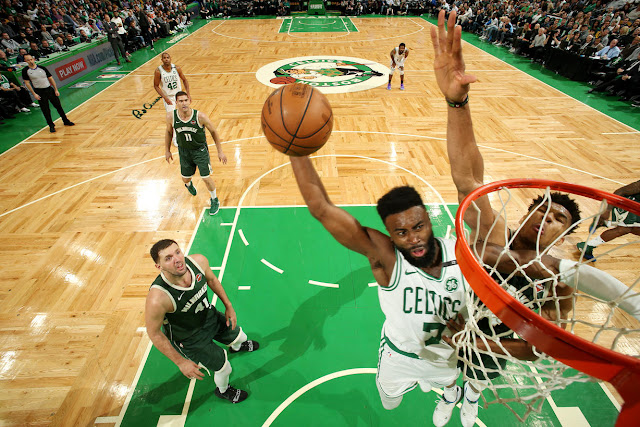 In March, I wrote about Brown's surging play and how his value to the team would be vital in the upcoming playoffs. The following is my take from a March game versus the Hornets:

While most of us are cussing out the Celtics for their failure to close out games, I'll take the opportunity to remind Boston fans of Jaylen Brown's continued surge. In the loss to the Hornets last night, he poured in 29 points on 10-of-13 from the field ans 5-of-6 on 3-pointers. A total of eight of his 10 made shots were assisted by various teammates. The only question may be why the team didn't go to him more often.

Jaylen Brown is gonna have posters of Giannis all over his house by the time this series is over. My God. pic.twitter.com/l2TuCUpFyX

The squeaky wheel gets the grease and the player in the spotlight gets the attention. But Jaylen remains the Quiet Man who doesn't demand the spotlight. Despite all of that, he is getting the attention because of his improved play and consistency. The spotlight certainly shined on him last night.

So the Quiet Man is finally in the spotlight - as is Giannis Antetokounmpo being the Buck-in-the-headlights as Jaylen keeps jamming on him. I have always admired Jaylen's gentle demeanor, but it belies a quiet determination to excel. Where would we be without him this post-season?