The Boston Celtics came into Game Three of the Eastern Conference Semifinals a mystery.

How would they play after being dismantled in Game Two in much the way they'd done to the Milwaukee Bucks in Game One? With both Marcus Smart and Malcolm Brogdon out for the tilt, both teams fielded the same starting lineup as Game Two.

Boston won the opening tip, but neither team scored for nearly a minute, with the Cs jumping out to an early 2-10 lead before the Bucks got going offensively. The score was close most of the first quarter, with both teams playing fast and loose early, Milwaukee taking the lead briefly before the Celts retook the lead in the waning seconds of the first. 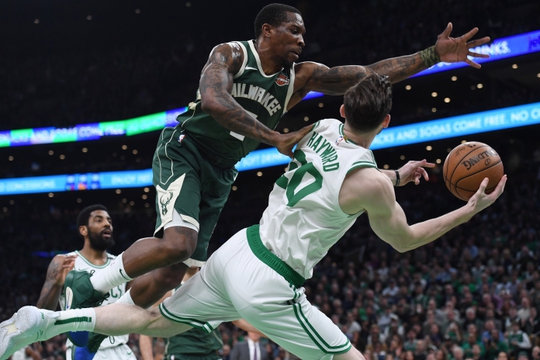 The second frame began with the Bucks fighting their way back to a 30-30 tie before Jaylen Brown went on a tear, scoring five quick points early in the quarter. The Bucks still managed to fight their way back into it, however, behind a balanced effort from Pat Connaughton, George Hill, and Brook Lopez while exceptional defense on Giannis Antetokounmpo slowed if not stopped the star.

The first half ended with Milwaukee trailing Boston by just one point when Hill nailed a jumper with just 30 seconds left, the Cs unable to connect on a layup by Gordon Hayward, leaving Boston up 56-55.


The Celtics lead at halftime, but certainly felt like they had a couple of opportunities to pull away squandered. 13 points for Kyrie, all in the first half. Celtics are losing the bench battle 19-3.

The second half began with a trip to the charity stripe for Antetokounmpo, where he tied the game, missing one. Neither team could get much separation for long, with several lead changes despite good play from Brown, Lopez, and Niko Mirotic.

As the quarter wound down, Giannis continued to get calls some Celtics fans were not especially pleased with until he was called for a charge, taking a seat in exchange for Brook. The Cs were slow to capitalize on the spell, however, with Khris Middleton tying the game up at 79 with his own trip to the line at the 4:25 mark.


Stevens on losing focus in Q3 because of officiating: I don't think that was it. We weren't as tight as we could be on defense. There is stuff we have to do better on both ends.

It was all downhill from there, though, as Boston began to see the wheels come off, with Middleton and Hill driving the Bucks to a 95-87 lead to close out the quarter.

The final frame did not go much better, with Giannis and Khris extending the lead to a dozen early, with the bleeding stopped briefly by a Marcus Morris Sr. trey soon after. Antetokounmpo and Eric Bledsoe kept piling it on while the Cs went cold, however, and soon Boston found itself in a 16-point hole.

A few attempts were made by Gordon Hayward and Al Horford to get the team back into it, the latter cutting the lead to just five with seconds left in the game, but the Bucks escaped with a win on the road and put Boston as the trailing team in the series for the first time, winning 123 - 116.

Boston next plays Milwaukee at home for Game Four on Monday, May 6th, at 6pm ET.