As so-called "supermax" designated veteran player contracts continues to force teams to make hard decisions about the league's very best players, there's at least one the Boston Celtics should be keeping an eye on.

That player is Damian Lillard, and the reason why the Cs should at very least be making a timely phone call is the combination of factors that could trigger a trade Boston might find themselves very much in need of.

Lillard and his team, the Portland Trailblazers, are saying all the right things after overachieving in this year's playoffs before they were roundly dispatched by the Golden State Warriors, but when it comes time to pay up, even if the team doesn't mind coughing up the near-ludicrous amounts of money it'll cost them to run the same team back, it certainly won't be doing much better than this year's Blazers did. 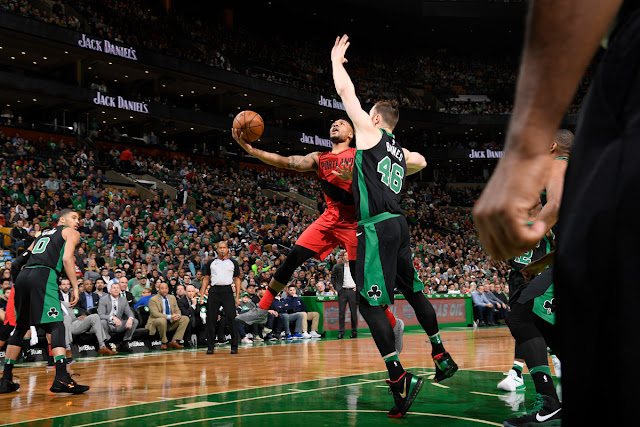 Of course the team will be better with a healthy Jusuf Nurkic than a one-armed Enes Kanter, but we're kidding ourselves if we believe that even the healthiest of Portland teams will have even an outside shot of defeating a Kevin Durant-less Golden State Warriors next season, quite likely their best possible scenario and very far from guaranteed.


Damian Lillard is expected to get a $191 million supermax deal from the Trail Blazers this summer, sources tell @ChrisBHaynes 🤑

They also cannot do much to change the team they have, as the players they have under contract next season, as Evan Turner and Meyers Leonard would likely require a first-round pick each to convince another team to take on their outsized deals, and with the Blazers likely to fall well outside the lottery in the short term, possibly even more.

When those two come off the books, Lillard's extension would go on, erasing pretty much any tools remaining to improve the roster meaningfully, locking in more or less a roster unlikely to sniff even the Conference Finals without some luck.


The incredible Blazers run has ended — again in a sweep.

Do they blow it up?
What did they learn about Zach Collins in Year 2?
Does Damian Lillard deserve the supermax?

At the same time, a lot of things have gone the wrong way for Boston over the last two seasons, and even Trader Danny may find himself becoming a little risk-averse as the core of his rebuild becomes the focus of more than a few teams who'd like to pluck Jayson Tatum and Jaylen Brown away from the Celts while their value is likely as low as it may ever be.

Should that bad luck continue, it'd be wise to have made a call to Portland to see if a deal might be had for Lillard.

The timing would be difficult unless the Blazers' private feelings were significantly different than their public face. But it would not be the first time we heard one thing regarding a supermax-level player but then saw a different outcome when it came time to pull the trigger  -- think Blake Griffin and the Los Angeles Clippers, or DeMarcus Cousins and the Sacramento Kings -- but unlike the former, Portland may need to think on how poorly it has fared in past years attracting free agents.

However, with two years remaining on his current deal after this one, having a star of his caliber with at least two seasons to try and get the chemistry and strategy right could be a legitimate option regardless of whether the Trailblazer's ownership prefers a partial teardown or complete overhaul. Gordon Hayward's contract is a near-perfect fit salary-wise, and with Marcus Smart and a number of restricted free agents (Marcus Morris Sr., Terry Rozier and Daniel Theis), potential tools to unload either Meyers or Turner to Boston or a third team.

I have to stress, none of this is likely; the most logical outcome for a team like Portland, whose owner, Paul Allen, recently passed with chatter suggesting the team likely to be sold before any negative implication to a Dame supermax are likely to be felt, is to offer and ink that deal. But given all the bad luck Danny Ainge has had of late, some due diligence towards making a change in that luck is by no means too unlikely to make the call not worth a shot.