In each of the last three NBA regular seasons, the Houston Rockets have compiled more attempted three-point shots than overall successful FG’s – over 500 more 3FGA’s this past season alone. To this point in time, they are the only team to have crossed this numerical threshold for a full 82 games. 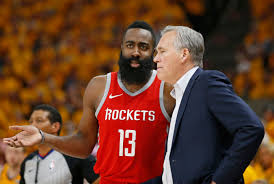 The season just before this on-going three-year Rocket run (2015-16) was the last time any NBA team accumulated more missed free throws than successful three-point shots – both Milwaukee and Minnesota wound up negative for the season in this little calculation I’ve taken to calling “Striping.” Just the year before, Memphis had reached the second round of the playoffs despite sporting a negative seasonal “Stripe” score.

I’m prompted to mention this odd statistical nuance by the numbers our Celtics produced during the 2019 post-season, particularly their poor performance against the Bucks. For instance, the C’s Game 5 elimination in Milwaukee marked only the third time in 91 regular-season and playoff games in which they had more misses at the foul line than makes from the Arc (-1 “stripe”).

While it was Boston’s three-point shooting that abandoned them in their 2018 playoff finale, some “foul” foul shooting (26 – 34) aided and abetted the close-out this time around. 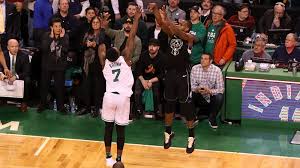 But what really caught my eye was in the Series Stats – Boston had exactly as many FG’s in five games as they had 3FGA’s, 179 of each. Consequently, their FG accuracy and 3PAr (i.e. usage rate for treys) are identical – .410 in both columns.

Now it should be noted that coach Mike Budenholzer’s Bucks were simultaneously making only 198 FG’s while attempting 207 3FG’s … I said “Hmmm!” right after double-checking my addition. 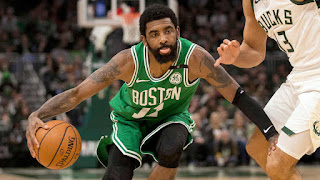 I decided to take a closer look at this year’s 15 completed series from the perspective of this FG : 3FGA ratio – it turns out that a team had compiled more three-point attempts than on-target FG’s on SEVEN different occasions. Both the Bucks and Raptors did it during their just-completed Eastern Conference Final. Houston, unsurprisingly, turned this little trick in both its series, in addition to Utah and Orlando in their first-round defeats. (In the 2018 Playoffs, only the Harden Bunch surpassed this threshold, and in only two of their three series.)

During these playoffs, round-by-round, FG% has been dipping while 3PAr has risen: 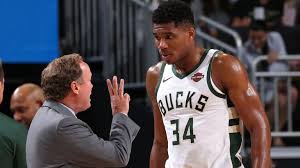 In Games 3, 4 & 5 of the Milwaukee series, playing against the league’s No. 3 team in 3PAr, the C’s launched 120 treys – seems as if the Stevens Gang was trying to beat the Bucks at their own game.

And here’s a final ironic twist to this most disappointing Celtic season.

In Mike Budenholzer’s rookie season as an NBA head coach (2013-14), the long-time San Antonio assistant led his eighth-seeded Atlanta Hawks into a first-round playoff series against a stout Indiana squad, extending the top seed to seven games before falling. For the series, Coach Bud’s troops, who’d ranked second in the league in 3PAr, scrapped their way to 212 successful FG’s while attempting 230 three-pointers. (A Budenholzer-coached team has finished lower than No. 6 in 3PAr only once.)

From this angle, it appears that Bud and his Bucks got Brad’s boys dancing to their beat.

NBA teams continue to break new barriers when it comes to the use of the three-point shot.

In Game 3 of their opening round series, both Houston and Utah took more three-point shots than two-point shots … therefore, each posted a 3PAr above .500. The only other “Double .500” game had occurred a month prior in a Bucks’ home victory over the Lakers.

And three teams – all during regular-season play – have surpassed .600 in 3PAr … Houston (TWENTY times), Dallas and Brooklyn. (16 of these 22 games were played this season.)

Should a basketball purist be concerned that the Rockets are 16 – 4 in those 20 games?

And, as one of those old-school purists, should I feel uneasy because that 60% usage barrier was reached – by the Rockets (61 treys on 94 shots), of course – on, of all days, my 60th birthday? 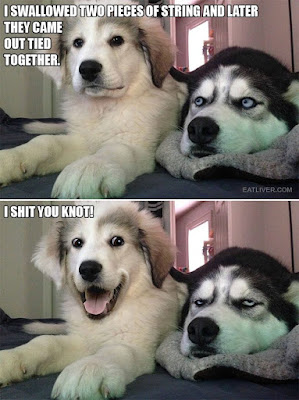