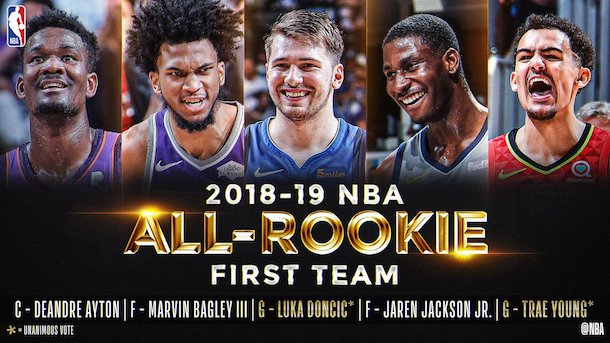 Not sure if I've ever seen the top 5 selections in a draft end up as the NBA All-Rookie 1st team, but it's happened this year. Luca Donkic and Trae Young of course led the way. Donkic has been the NBA Rookie of the Year favorite throughout the season, but Young post-All-Star break played like gang busters.

The Celtics dodged a bullet when the Nets improved in the 2017-18 season, so the unconditional Nets pick that the Celtics traded to the Cavs as the centerpiece of the Kyrie Irving trade ended up only being 8th. The Cavs selected Collin Sexton with that pick. Sexton is joined by Shai Gilgeous-Alexander, Landry Shamet, Kevin Huerter, and Mitchell Robinson on the 2018-19 NBA All-Rookie second team.

If Kyrie walks this summer, missing out on Sexton or Gilgeous-Alexander would hurt a little, but definitely not as much as losing out on a Donkic would of. Hopefully the Celtics can get a couple players on the 2019-20 All-Rookie teams with their upcoming three first rounders. It's been a while since Danny Ainge was able to find a nice steal outside the top of the draft. 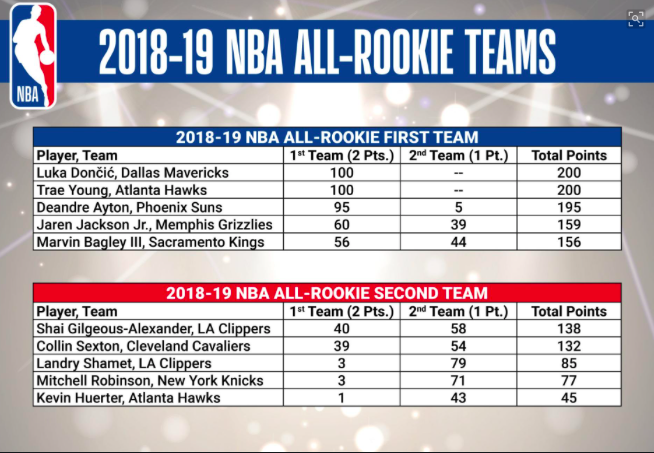