If Marcus Smart plays tonight, what role should he have?

Sure, the month, round  and even game of the collision between the two East teams is different, but the parallels are still evident. An injured Marcus Smart (then: thumb; now: oblique) returns to a struggling Celts in a series against an ice-cold shooting Bucks team.

Last time, the series was tied 2-2 before the Green Wolverine beat the odds and healed faster than expected to help the team seal a win in a seven-game series. Last time, Boston had home court advantage. 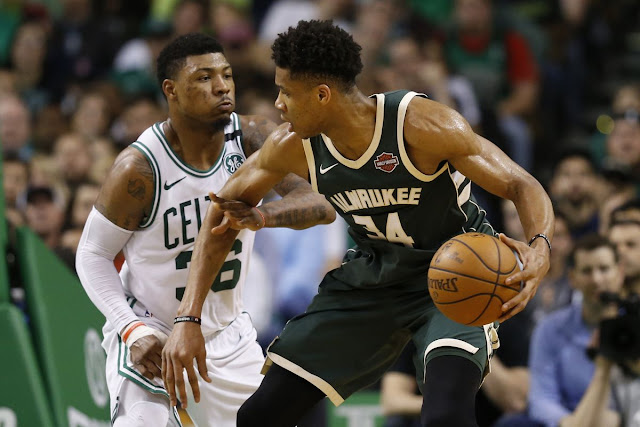 This go-round, the Cs have neither a tie in the series nor home court, and the team they are facing is improved at almost every position, with star Giannis Antetokounmpo even more unstoppable than ever.

We probably ought to temper our expectations, here, folks.

I'm not saying that Marcus can't step into whatever role coach Brad Stevens decides is best; history suggests he can, but even healthy players have off nights, and it's not unreasonable to assume Smart may be due for one given how long he's been away from live play no matter how well his body responds.

Brad Stevens: "If Marcus becomes available, whenever he becomes available, he’s a guy that can impact the game whether it’s for a couple minutes or a long time. We’ll certainly utilize him, and we’ll be happy when we get him back.”
— Nicole Yang (@nicolecyang) May 5, 2019


More importantly, injecting a Marcus Smart back into the limited supply of minutes will require changes to rotations and strategy; mercifully, the thing he'll most be needed for -- switching defense on both the perimeter with occasional help slowing Giannis -- is something he should be able to handle if he's truly ready to play.

If he decides to play the hero before he's sure his shot is with him, he could easily shoot the team out of the game (and, at this stage, series, if we're being honest); however, I doubt this happens given the growth we have seen in his game this season. We may see him mostly absorbing Terry Rozier's minutes for the first game back, with a little extra as a closer, perhaps, if his defense proves impactful.

We could also see him deployed as a starter, but that's unlikely unless Jaylen Brown moves to the second unit or up to the three, both of which present somewhat risky propositions. The former runs the risk of demoralizing one of the team's most reliable players throughout the series with what might be seen as a demotion despite his clear value as a starter, and the latter would be a change significantly departing from what Boston has done on both ends of the floor all season -- not the sort of move you make until your back is against the wall in the postseason.

The Cs could play very small, using Smart as a diminutive power forward alongside Al Horford given Milwaukee has few if any players able to defend Marcus at that position (and he's actually defended Brook Lopez fairly well in the few switches they've faced each other over recent years, should the Bucks stay big). This would also be an unusual change of pace, but not so much I'll be surprised if it happens.

What do you think? How should the starters and rotation look if Smart returns tonight? Who do you think Brad will actually start? Let us know in the comments below.