While we Boston Celtics fans have been licking our wounds, the NBA Draft Combine has been going down, and our favorite front office has not been taking time off to do the same.

Some of the most intriguing news to come out of the Chicago-based event this season is actually not about a player at all, but a former Celtic who left the Big 3 league he'd planned to participate in this summer for a shot at a Combine coaching gig -- and that ex-player is a one Kendrick Perkins. 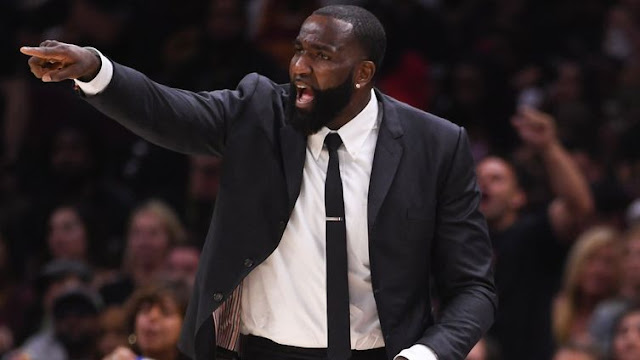 While it's unclear whether there's any connection to Boston taking him on to fill the vacancy created with assistant coach Micah Shrewsbury's decampment to Purdue -- one would think Perk's castigation of Kyrie Irving might make such a hire difficult -- the mere fact that such a vital part of our 2008 title can continue his dream into that part of the game is great news, and we know for a fact he'd be interested.

Said Perk of the opportunity (via the team's own Taylor Snow):

"Whenever you’re able to drop knowledge on young kids that are trying to fulfill a lifelong dream, it’s always a pleasure ... But I’m just trying to get my feet wet as far as with the coaching and trying to get as much experience as I can, and I think it’s turning out well."


Boston is also being very active in getting a look at prospects should it choose to retain and make its three 2019 NBA Draft first-round picks, including:

More of a role player in the three-and-D mode, expect this prospect to be taken with one of Boston's (20th or 22nd) picks if he's taken.

Health and motor issues might send one of the highest-ceiling players in the draft into the Cs' range of picks, and Ainge is not known for passing on such high-risk, high reward prospects when they do (see: Jared Sullinger, Robert Williams).

Something of a jack-of-all-trades defensively, this forward might be the ideal sort of young prospect the team needs to fortify its thin frontcourt, which will need a player able to guard both in the post and on the perimeter when Al Horford is not on the floor -- or, god forbid, on another team.

A longshot at 14th, this would be a more reasonable option for Boston is they try and consolidate two of the picks for a crack at the low lottery, and while questions remain about his game at the next level, his prototypical do-everything wing status makes him an intriguing talent.

Speaking of the Boilermakers, this guy's scoring ability -- especially from deep and even in transition -- could be the perfect addition given where the game seems to be going in recent years.

Another likely trade-up option, White's skillset and position (a larger, score-first floor general) could be attractive should the unthinkable happen and the Cs be in need of a starting point guard next season.

An explosive, athletic guard who could help fortify Boston's backcourt depth if Terry Rozier is expected to depart the fold, this player would also be more likely to be selected with one of the team's later firsts.

Like Clarke, Williams is a versatile defender with a tad more toughness and a pick-and-pop game that makes him an interesting option for the Cs to explore with their own pick.

Unlikely to fall anywhere near Boston's range of picks, there's always the chance of consolidating picks in this or future drafts for a crack at top talent, exactly what you'd need to land this 2019 NCAA standout.

Another potential Robert Williams-like scenario in both the fact he shouldn't be on the board when the Cs select, but his extremely raw rim-running game might just put him lower in the draft than many anticipate.

Similar to Harry Giles, multiple ACL tears diminished this intriguing big man's stock, he remains an option for one of the team's late picks should they want a high-upside, high risk prospect yet again.

Somewhat raw with a lot of potential -- think Jaylen Brown with much worse handles and decision-making skills with a game more reliant on slashing -- KZ could be an option for Boston with a later pick if he's still around.

Another project big, his shooting -- especially from three -- is intriguing, but could take several seasons to get into NBA shape even as a rotation player.

A slightly raw but high-motor wing with lots of potential, he may well be gone before Boston selects, but his potential scoring upside will have the front office watching closely on draft night.

Low-risk, solid reward is what we can expect from PJ, and he might be exactly what the doctor ordered if going in on the youth movement ends up being the direction the front office takes. He may still need to work on his shot, but he can still get buckets and his high-character reputation is an added bonus.

With teams trying their best to determine whether Langford's thumb injury is responsible for the lack of development his shot so desperately needs was a significant culprit, Romeo might find himself therefore art in thine range of picks controlled by thee Celtics; it'd be hard to see him getting the minutes he'd likely need to fix that issue on a similar roster to last year's however.

We all know Danny Ainge values guards with absurdly large wingspans (coughcoughTerry Roziercough), so a 6-foot, four-inch guard with a seven-foot one inch-wingspanned-one is certainly on Ainge's radar, even if his game is a little rough.

Another thing to keep in mind is these picks may also be made on behalf of another team altogether, most likely the New Orleans Pelicans for reasons I won't elaborate on because I trust you have a pulse. But we'll continue to report on what we're hearing from reliable sources on Boston's potential draft options as they bubble up, so stay tuned.