BIG3, the professional 3-on-3 basketball league held its player draft yesterday in Las Vegas. A total of 132 players were competing for 31 open roster spots. Royce White was the top overall pick by the Enemies, joining Lamar Odom and Gilbert Arenas. Two former Celtics, Gary Payton and Jason Terry got into a friendly discussion, which can be seen in the tweet below. The results of the draft, via the BIG3, follows: 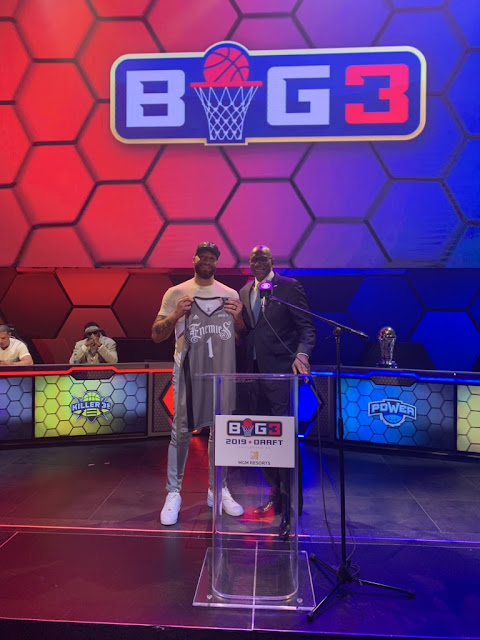 With the number one pick, the Enemies selected Royce White. The Iowa State standout shined at the Player Combine and will join up with Lamar Odom, Gilbert Arenas, Perry Jones III, Craig Smith, and Frank Robinson. White is an advocate for mental health whose NBA career was impacted by his fear of flying. Tonight his shirt read, “I Flew Here.”

Former 2010 NBA 1st rounder Larry Sanders was picked by Gary Payton’s 3-Headed Monsters. Sanders is known for his versatility, shot blocking, and size. After a few seasons in the NBA, he decided to walk away from the game due to anxiety and mood disorders. Sanders was a standout at the Player Combine and will join up with Mahmoud Abdul-Rauf, Rashard Lewis, Reggie Evans, Mario Chalmers and Tre Simmons.

Former 2007 NBA number one overall pick Greg Oden, was selected by the Aliens with the 7th pick in round one of the 2019 BIG3 draft. Oden joins captains Kendrick Perkins, Shannon Brown, Andre Owens, and coach Nate “Tiny” Archibald.

Ooo don't hurt em Dusan! Will the world's #1 FIBA player get the chance to take on the competition in the BIG3? (@MrBullutproof) #BIG3Draft pic.twitter.com/95If3UEHM0

During the upcoming 11-week BIG3 season, games will air live on CBS Television Network and CBS Sports Network on both Saturday and Sunday, with a champion crowned live on CBS on Sunday, Sept. 1 (3:00 PM, ET). CBS Television Network will broadcast more than 20 hours throughout the season, with CBS Sports Network set to televise more than 25 hours of additional live game coverage.

Teams will be coached by some of the top legends in the game, including Julius ‘Dr. J’ Erving, Gary Payton, Nancy Lieberman, Rick Barry, Lisa Leslie, and George ‘The Iceman’ Gervin.