Sweeps are rare, even for BOS; what do they tell us about this Cs team?


You would probably think a franchise as storied as the Boston Celtics would possess a history littered with the dust of NBA Playoff sweeps.

And you'd be wrong if you did, as such a feat -- even against weak playoff teams -- is rare, even for Boston. Across the league, there have never been more than six sweeps in a postseason save for 1989 (a massive outlier with nine such series), and most postseasons have had just one or two over the entire postseason.

The Cs have had just 12 sweeps in their history (a long one, as one of the NBA's original teams), and a mere six since the league expanded the postseason to a best-of-seven series. Over that period, Boston's played 94 such series, and has only managed a sweep in just under 16 percent of them. 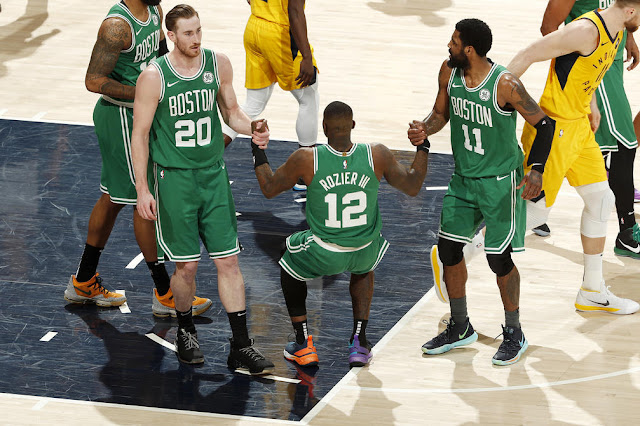 So, I got to wondering just how good a predictor of postseason success this feat actually was, and took the deeper dive. You'll be happy to hear it's a strong indicator, but it has a big fat asterisk, too. The good news is that three of the five previous postseasons in the seven-game-series era, the Celts finished their run hoisting a banner.

The bad news is there's a lot of parallels between this current season and the seasons that did not result in a banner.

The Celtics only have five 4-game sweeps in franchise history, only one in the last 32 years (New York 2011)


They did not win it all when they swept the Houston Rockets (1980) in the second round (yes, you read that right, Houston was once in the East), falling to Julius "Dr. J" Erving and the Philadelphia 76ers in the Conference Finals, and again in 2011 when they swept the New York Knicks in the first round.

That 1980 team, featuring a rookie from French Lick, Indiana (Larry Bird for the bandwagon contingent) alongside Dave Cowens, Tiny Archibald, Cedric Maxwell, Chris Ford, M.L. Carr and the last gasps of "Pistol" Pete Maravich's career, was a very good-if-not great outfit that just so happened to collide with a similarly talented 76ers squad led by one of the greatest players to ever play the game.


Something similar happened in 2011, when Boston, despite crushing the Knicks, found themselves up against the league's rising star -- and arguably one of the greatest to play the game yet again -- as they collided with the meteoric rise of the Lebron James-led Miami Heat, falling in just five games, as they did vs. the 76ers in 1980.

In the years that the Celtics did have success, they had fairly weak opponents, recent additions who considerably improved the team -- or both.

In 1959, they had to get past the Syracuse Nationals, who were a sub-.500 club, as were the Lakers. In 1981 Boston added Robert Parish and Kevin McHale to get them past the 76ers, facing only a .540 club (Chicago) and a sub-.500 club (Houston) in their way of a banner. In 1986, Boston fielded arguably one of the best teams any season has seen, and certainly the best of Bird's career.


In that season, they lost only one game before the Finals (to the Dominique Wilkins and Doc Rivers-led Atlanta Hawks), and only two to the eventual runners-up, the Rockets, both teams hovering around .600 (Boston logged a .817 winning percentage that season).

That season saw health issues with Kendrick Perkins, Shaquille and Jermaine (no relation) O'Neal disrupt the team considerably, with the team not really ever finding an identity between Perk's early rehab, the impact on the team's chemistry after he was dealt to the Oklahoma City Thunder, and the O'Neal not-brothers' health in the regular season and playoffs alike.


In 2011, we can see parallels of both last season's Cs and this season's Celtics, which ought to give us pause. But on the other hand, adding two All-Stars to a team that whiffed the year before (as happened in 1981) was just what the doctor ordered to get past Earvin Johnson. So, it's not all doom-and-gloom when using a sweep in the playoffs as a metric for postseason success.

Which type of team will we see take the court next week to play the rising force coming out of Milwaukee? That remains to be seen -- Boston has had the Bucks' number over the last few seasons, seemingly much better equipped to defend them, as what the Bucks are good at stopping (mid-range shots and getting to the line) Boston doesn't much care about, while also having had success making Giannis Antetokounmpo rely on a sub-par jumper.

Can the Bucks unlock a new schema yet unseen to defeat the Celtics in the next round with a coach known for rarely adjusting in the postseason? Can Boston truly add two All-Star-level talents when the team steps onto the parquet in the second round? Only time can tell, but if there's anything we've learned from the first round about Boston is they are -- at minimum -- an extraordinarily talented team to have swept the Pacers, and might just be holding something back still.