Semi in the Eastern Semis?- We might see Ojeleye vs. The Greek Freak once again


In a previous article, I looked at the upcoming Eastern Conference Semi-Finals, probably pitting the Celtics against the Greek Freak, Giannis Antetokounmpo, and his Milwaukee Bucks. Celtics rookie Semi Ojeleye got his first NBA start in Game 5 of last years playoffs versus the Bucks, and his assignment was to slow down Giannis. 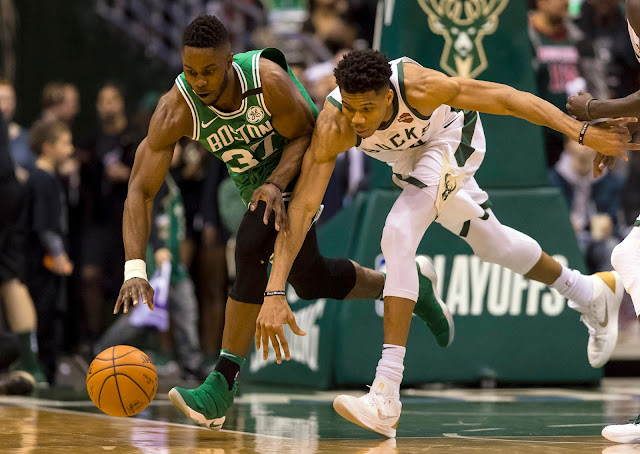 The Greek Freak had scored a combined 65 points in games one and two. Semi was on the floor for a combined 14 minutes. In games three and four, Giannis scored a total of 46 combined points, and Ojeleye played a total of 30 minutes. Brad Stevens must have seen what we see in those numbers and gave Semi the start in Game Five. Antetokounmpo scored only 16 points in that game with Semi accumulating 31 minutes of floor time - and the Celtics got their third win.

Ojeleye also started Games Six and Seven, playing 22 and 29 minutes, respectively. Boston took the series and moved on in the playoffs. Take a close look at the excellent video footage by Tomasz Kordylewski. The two blocking foul calls on Semi were ludicrous. But he is no longer a rookie, and hopefully that may change this time around.

We are still not sure it will be Milwaukee facing Boston in the Eastern Semis, but it looks like it will happen. Semi is one of the most-accomplished defenders I can recall so early in his career. He moves his feet quickly and effortlessly. With more respect from the referees, he could be a defensive factor against Giannis. Should be a good series.