Somehow, 3rd seed still on the table for Cs with late 76ers losses


Somehow, the third seed in the 2019 NBA Playoffs is still on the table for the Boston Celtics.

Of course, "on the table" by no means suggests such an eventuality is likely -- it very much is not. To get there, our consistently inconsistent Cs would have to win all three of their remaining games, starting with tonight's battle for the fourth seed with their first-round opponents, the Indiana Pacers (I swear I have written about 30 iterations of this sentence over the last week and a half).

They would then need to beat an Orlando Magic squad fighting for its playoff life, and forego rest against a Washington Wizards team led by a one Bradley Beal, who has been playing with something of a chip on his shoulder despite the fact the team has been eliminated from postseason play. 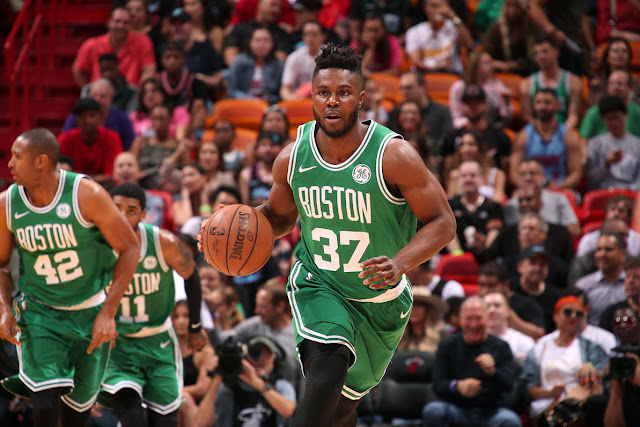 Conversely, the Philadelphia 76ers, currently sitting in the third seed, would need to drop two of their three last games, which include a game against an equally playoff desperate but banged-up Miami Heat and two games against the tanking Chicago Bulls. It'd take a solid run with minimal rest on Boston's side coupled with one of the more shocking ends to a home court playoff squad in a long time to happen, so I'm not holding my breath.

There's also the question of whether Boston would even want the additional round of home court advantage, as it would mean playing either the Detroit Pistons, Brooklyn Nets, or Magic in the first round, only to likely face the Toronto Raptors in the next, taking away the home court boost against the one team in the East they may most need it against (Boston would only keep home court if the seven seed advanced).


Bucks beat the Sixers in Philadelphia...the Celtics are still alive for 3rd.

If the Celtics win out, the Sixers need to win 2 of their last 3 to stay 3rd.

Currently, after Indiana, the Cs would face the winner of the Milwaukee Bucks - eighth seed match, and while probably the most likely finals contender overall, the Bucks have had much difficulty with Boston when locked in in recent years. If they managed to keep that mojo rolling, there's a small chance of Toronto being eliminated by the 76ers before the Celts ever had a chance of meeting up with them in the first place, and Boston has dominated Philly since the Allen Iverson era.

Ultimately, I'm much more concerned with how this team plays tonight, as it is the most likely and attainable goal left for the Cs in the regular season, and may set the tone for the series to come in just a few weeks. Let's keep out eyes on each challenge as it comes, and worry about the next in its time.