If the Bucks make an adjustment for G2, look to the backcourt


I'm not usually the sort to try and figure out what a team the Boston Celtics are facing in a postseason series is doing wrong, but after Giannis Antetokounmpo and the Milwaukee Bucks got manhandled in Game One of the Eastern Conference Semifinals, it's probably worth taking a look at their most likely counter, because it's both obvious and gameable.

It's far, far too early to proclaim this series won, but given the apple doesn't fall far from the Gregg Popovich coaching tree, it's safe to say that in the broader scheme of things, coach Mike Budenholzer isn't likely to make any big adjustments in Game Two, if he makes major changes at any point in the series.

And, to be honest, that's probably wise. By the time you get to the second round, there's really no time to workshop radically different schema than the ones that got you to the postseason in the first place. You have to trust what you did will work -- particularly when it gets you home court for the entire postseason your team survives to play in. 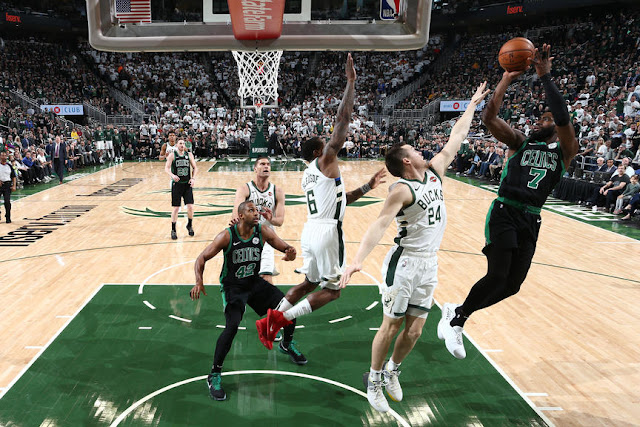 But as much as sudden, tectonic shifts in play style may be a desperation move with little record of success, smaller moves largely within Bud's system should be our first expected adjustment. The Bucks like playing a drop zone on defense that, while brutally effective against most opponents, doesn't do much to stop Boston.

The scheme is to effectively eliminate the paint as an option, which the Celtics have effectively done by virtue of their offense, which rarely bothers to send players in to attack the cup. The combined effect of this plus Boston's system defense that forces Giannis to be a jump shooter resulted in exactly the disaster that SB Nation's Michael Piña accurately predicted before the season was really even underway.

Expect lineups that will be more effective at switching as a result -- but this is a move that will require personnel currently unavailable to Milwaukee in the form of Malcolm Brogdon (and to a lesser extent, Donte DiVincenzo) to reach the team's optimal version of a switching-capable lineup. Luckily for the Bucks, Brogdon may be able to return as soon as Game Three, but they can still make some minor changes in this direction that will help another minor issue.

The Bucks basically split their backcourt min evenly between Bledsoe (25) / Hill (24) at PG & Brown (22) / Connaughton (24) at SG. Not knowing who your main guys are can't be a good thing. And the fact that Connaughton had the 3rd-most FG attempts on the team is pretty nuts.
— Mark Van Deusen (@LucidSportsFan) April 29, 2019


A team that's really trying to get past talented, high-level competition in the postseason cannot be fielding marginal starters big minutes in the postseason, and Budenholzer playing four guards north of 20 minutes a game simply can't continue. Expect a shrinkage in that rotation, with Bledsoe taking most of George Hill's minutes at the one, and Sterling Brown most of Pat Connaughton's at the two.

Bledsoe may be smaller with a shorter wingspan, but he's much better at switching than Hill, and Sterling is not only bigger than Pat, he's also shooting much better deep, which is what they need to give Giannis his best looks on offense (.500 compared to .267).

If I were Boston, I'd spend a little extra time studying up on Bledsoe and Brown in particular, especially in the limited context available of them actually attempting switching defenses in anticipation of these likely adjustments from Milwaukee -- good planning matched with good execution might just land a knockout blow to their opponent on Tuesday night.