In last years playoff run, the Celtics fielded six players logging 29-or-more minutes/game, from Terry Rozier's high of 36.6 MPG down to Marcus Morris with 29.6 MPG. That duo, plus Jayson Tatum, Jaylen Brown, Al Horford, Aron Baynes and Marcus Smart, will all be back this post-season. But with Kyrie Irving and Gordon Hayward joining the rest of the crew this time around, things will look quite different. 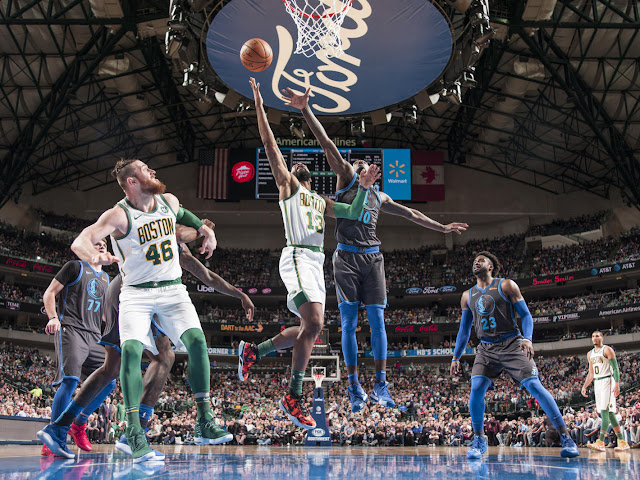 Al Horford was certainly doing his best Playoff Al impression last post-season, playing 35.7 minutes and notching 15.7 PPG, 8.3 RPG, 3.3 APG, 1.0 SPG and 1.2 BPG. He simply did it all. He will be counted on heavily again this year for both big minutes and solid, versatile production. His importance in the upcoming playoffs can not be overstated. Note: The following bad-taste tweet was an April Fools Day "joke". I fell for it - didn't think it was funny - and let me know what my readers think.

BREAKING: Al Horford expected to have major surgery on left knee and will miss the remainder of the season, per woj. pic.twitter.com/Qe1Q406S2X

Celtics’ net rating in March with…

Horford sat out 3 of last 5 games but feels like getting that knee right is only way Celtics have chance in playoffs.

I have already made a case for more minutes and a move to point guard (2nd unit) for Gordon Hayward. The starting backcourt of Kyrie Irving and Marcus Smart has worked too well to tamper with, and either Tatum or Brown fits the small forward spot quite nicely. The revived Twin Tower A-Team of Al and Aron will round out the starting five for most games.

The non-starter from the Jay-Team, alongside Gordon Hayward will complete the Solid Seven. How about Terry Rozier. Only one thing is certain here. He will not be logging 36.6 minutes per game as he did last year. Barring injuries, I envision him playing somewhere in the teens for minutes with Gordon running the show. Morris' minutes will also take a hit from his 29.6 MPG last season. Enjoy the tweet below. It's real.

It's that time of year again where #PlayoffAl starts to gear up.

Check out Horford's @biofreeze peak performances from this past month ⤵️ pic.twitter.com/i8HTLJRhew

Semi Ojeleye is the wild card here. He averaged 13.5 minutes/game last year - played his usual tough defense - but had little offensive production. Semi is the victim of playing on a deep, talented team. He would be a significant, 24-minute role player on a mediocre team. But this is the playoffs. Expect the unexpected. A little-used player from the regular season can step forward at the right time and be a star, if even for one game.

Think of this. In effect, we are adding two All-Stars, Hayward and Irving, to a crew that came very close to facing the Warriors in the Finals. On paper, this Celtics team should go a long way in the playoffs. But unfortunately, they play on the hardwood, not paper. Al is critical - Gordon is playoff-ready - Smart is hitting his shots and has looked very good out there - and Kyrie is a closer if ever I have seen one.

Brad is going to employ his Twin Tower A-Team a lot, and if the Jay-Team can come through like they did last year, this team has a real shot at a Title. Who knows - T-Ro may resurrect himself and have a Hell of a playoff run (16.5 PPG, 5.3 RPG, 5.7 APG last post-season). If not, we have next season to look forward to. That's it, folks! No foolin'!