Things will get real interesting in the Anthony Davis-to-Boston saga going forward. David Griffin is the new General Manager of the New Orleans Pelicans, and he and Danny Ainge have a history going back to the late 1990's. Ainge was coach of the Phoenix Suns, and Griffin was an intern under him. 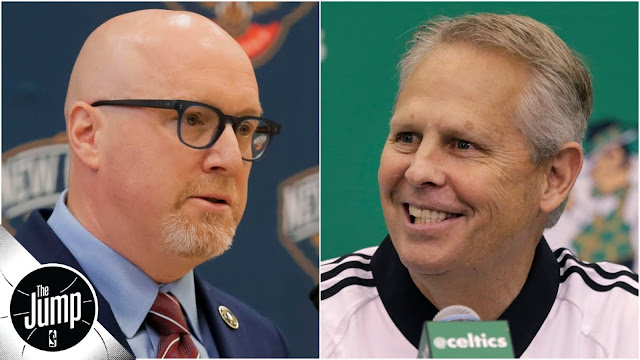 As we remember, Danny and Kevin McHale go way back as teammates on the Celtics, but don't expect a replay of the Garnett-to-Boston trade that Danny and McHale worked when Kevin was an exec with the Timberwolves. Although, that could happen with the Pelicans' Anthony Davis if things sift out in Ainge's favor (per Yahoo Sports' Darren Hartwell):

"I think to some degree you're mindful of what his tact is, right? You're very mindful if you're doing this, right?" Griffin said. "You're very aware of what everyone's tact is and the negotiating tactics and ploys that somebody might utilize -- you're gonna be aware of that.

"Danny's not unique in that way, that he's got a very specific style. What makes the situation with Danny unique is, we have the kind of relationship where we can really call each other on all that nonsense, and just sort of (say), ‘This is what it looks like.' I think because we have that ability it makes any conversation we would have along the way a fruitful one."

Ainge certainly has a rap around the league of fleecing other General Managers. The feeling of many was that McHale was fleeced, leaving him de-fleeced and out in the cold of Minnesota.. Actually the 2007 trade that brought Garnett to Boston wasn't exactly an unarmed robbery. Boston send Al Jefferson, Ryan Gomes, Sebastian Telfair, Gerald Green, Theo Ratiff and two first rounders back to Minnesota.

Any deal with Griffin for Davis will be business - plain and simple. Griffin is not about to blow what may be his first important move with his new team - trading away his best player. Griffin will want ample compensation in return. Don't forget, he is a student of Danny Ainge - who, in turn, was a pupil of the ever-shrewd Red Auerbach. One thing is for sure. The two friends will at least discuss the possibility of an AD trade and go from there. Let the fleecing begin. Just don't expect anything.