The Boston Celtics overcame a terrible first half performance to storm back and beat the Indiana Pacers 84-74 and take Game 1 of their first round playoff matchup. Call if nerves, call it not having Marcus Smart, call it whatever you want, the C's had a very ugly start, but were able to win a rock fight of a game simply because they have more talent on the roster. It's obviously great to win Game 1, but the Celtics will need to play a lot better if they want a deep postseason run. 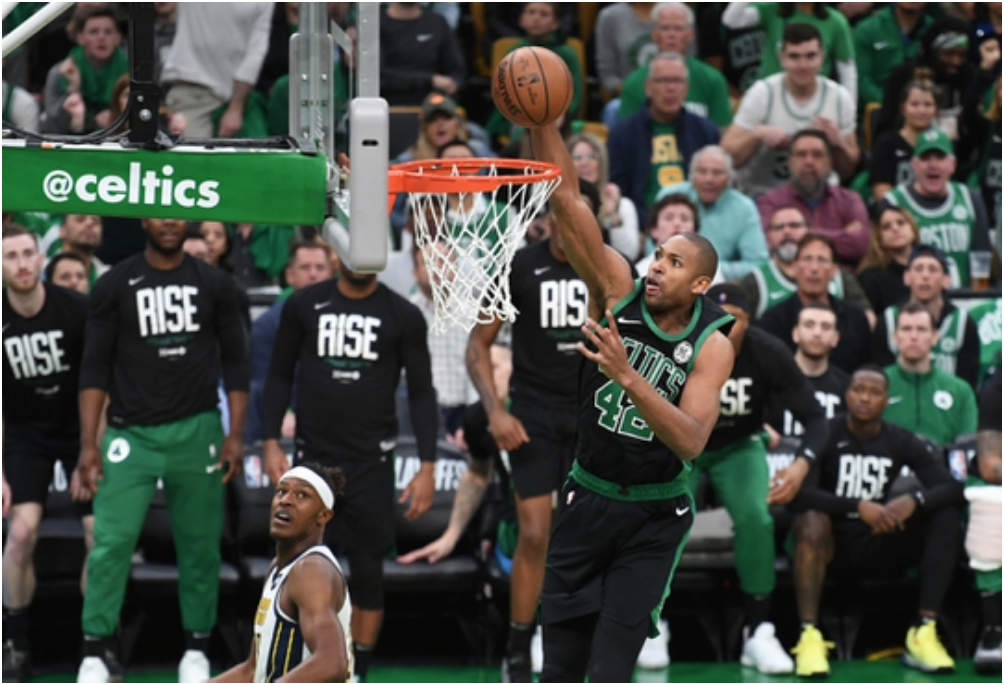 After being comically secretive about it leading up to game time, Brad Stevens decided to replace Smart with Jaylen Brown in the starting lineup. Brown has been one of the most consistent players since the All-Star break, and probably the team's best bet to replicate Smart's defense.

Jaylen Brown starting in place of Marcus Smart for Game 1 against the @pacers. #celtics

The Celtics struggled with turnovers early in the game. Especially on their own home court, that's a tough look for the first playoff game. Indiana was able to capitalize on the sloppy play and take an early 12-6 lead halfway through the first quarter.

The Celtics are trying to whip it around and get good shots. But they've been sloppy with some of the attempts and haven't hit some pretty good looks.

After the Pacers opened up an 8-point lead, the Celtics answered with a quick 7-0 run to cut the lead back down to just one. All points in the run came from Marcus Morris (5) and Gordon Hayward (2) off the bench.

Indiana continually tried to switch bigger wings onto Kyrie Irving and post him up on the defensive end, but Kyrie was able to hold his own and even force a few turnovers to get out in transition. Kyrie certainly isn't a defensive dynamo, but he can hold his own when he is engaged.

Celtics have tried to hide Kyrie on Wesley Matthews early and he's putting up a good fight in the post.

Morris, after having a pretty rough scoring stretch since the All-Star break, was hitting from everywhere in the first quarter. Morris was the spark that Boston needed in a sloppy stretch of play. Mook scored 12 of the team's first 20 points, knocking down two threes and adding some much-needed grit.

Playoff Mook in double figures in less than 10 minutes.

The Celtics closed the final 5:29 of the opening quarter on a 14-6 run pic.twitter.com/6ty9ujGRWV

After Boston scored the first points of the second quarter on a nifty Hayward fast break layup, Indiana scored the next nine to take a 7-point lead. The Celtics looked confused on a number of their defensive rotations, and gave the Pacers a number of open looks from beyond the arc, which came back to bite them.

One of the issues on the offensive end was Boston's continued attempts to attack Domantas Sabonis in isolation. After getting the big man switched onto their wings/guards, the Celtics forced drives against him. But Sabonis held his own, and that led to a number of ugly shot attempts.

Even after Stevens inserted Kyrie and Al Horford back into the lineup, the Pacers pushed the lead out to as many as 11 on the back of a 16-5 run. Indiana looked like they wanted the game much more than the C's, and it looked like the Celtics might have taken them a bit lightly.

The Celtics played ugly basketball in the first half. Ten turnovers, just 38 points on 32 percent shooting from the field, and an overall malaise that has, unfortunately, come to personify this team. The Pacers are a tough-playing team, and the Celtics need to be focused and play the right way to get a win. Regular season results mean nothing in the playoffs.

The last time the Celtics won a playoff game in which they scored less than 40 points in the first half? Game 1 of their first round series against the Knicks in 2011. Since then, Boston has lost the last 16 times that's happened -- including all 3 road games vs Bucks last year.

After a few (more) ugly turnovers to start the second half, Horford gave the team a shot of energy with back-to-back post shots, including a spin move reverse and-1 layup, that also gave Thaddeus Young his fourth foul, which sent him to the bench. The Horford charge tied the game at 45-45, and the TD Garden was booming.

While Horford was asserting dominance on the offensive end, the Pacers had gone completely cold to start the third quarter. They missed their first eight shots from the field and didn't score their first points of the second half until a Myles Turner free throw broke the seal 4:58 into the quarter.

Pacers are now scoreless for the first 4:10 of the 3rd and counting. Their offense just isn't good and they're going to have big droughts in this series and the Celtics have to pounce when they do.

Kyrie had his finger prints all over the third quarter run for the C's. He had eight points, two assists, two rebounds, and a couple of great defensive/effort plays in the first nine minutes of the third quarter. At no point was this a beautiful display of basketball from either team, but Kyrie was involved and engaged, and the Boston faithful could feel it.

The Celtics were playing solid basketball, and even opened up a double-digit lead late in the third, but Kyrie picked up his fourth foul and was forced to the bench. With Smart out and Kyrie on the bench, Terry Rozier needed to make an impact to keep the lead.

Rozier with the buzzer beater 3 to cap a 26-8 quarter in favor of the Celtics.

The Celtics followed up their third quarter performance with a 10-2 run to open the fourth. I don't know if they "flipped the playoff switch," but Boston certainly figured something out in the second half. Kyrie and Morris got the offense going, Aron Baynes and Brown pumped up the defense, and Indiana folded in on themselves.

#Pacers are now 3-for-27 FG in the second half. Chris Davis is like "Damn that's bad!" #Celtics #Orioles

The Celtics pushed the lead up to 20 points at times in the fourth quarter, and the rest was history. The Pacers just didn't have enough offensive firepower to compete once the Celtics started to make their shots. This was one of the uglier games of the season, but the C's were still able to win big once they figured things out.