One of our readers got it right following the Celtics win in Game One versus the Pacers. Boston still won despite less-than-stellar accuracy from do-it-all point guard, Kyrie Irving. So Indiana had better look out if he gets hot in Game 2 - which he did.

Brian Fleming • 3 days ago
Irving's shot was way off last night (Game 1), so the Pacers are in trouble if he gets hot. 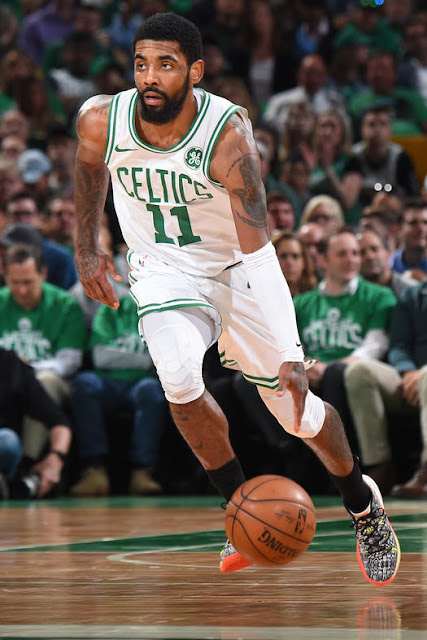 Irving poured in 37 points on 15-of-26 from the field and 6-of-10 on 3-pointers. In his spare time he racked up six rebounds, seven assists, one steal and two blocks. Celtics fans can only be thankful that Indiana does not have their own version of Kyrie.

Boston's successful teams have had a guy that wants the ball - can handle the ball well enough to get out of traps - can always get a decent shot off, whether a drive/layup or from distance - or alternatively get a crisp pass to a teammate. We had Jo Jo White in the 70's, Larry Bird in the 80's - and then Paul Pierce more recently. Now we have Kyrie Irving, and we are damn fortunate!

Kyrie is a shorter version of The Truth. He drives the opposition nuts with his Whirling Dervish moves. They have no idea what he is about to do - and honestly, sometimes neither does Kyrie until he does it.

According to Urban Dictionary: (Whirling Dervish): A person whose behavior resembles a rapid, spinning object. These actions are often spastic fidgeting and incessant babbling. The actions of the whirling dervish are irritating and annoying, often exhausting other people in the immediate vicinity.

That fits, right? "Incessant babbling", "irritating and annoying" (to the opposition), "exhausting other people in the immediate vicinity" (his defenders). Irving in the two playoff games thus far looks to be a true franchise player for Boston. Indiana will be tougher at home for the next two games, and if the Celtics take this series, Milwaukee has two talented guards in Eric Bledsoe and Malcolm Brogdon. The duo combines for 9.1 rebounds and 8.7 assists per game. Irving has held the fort so far, but getting Marcus Smart back for at least part of that series would be a real plus.