In tonight's season-ender against the Washington Wizards, there's at least one more reason to rest (almost literally) half the team not being spoken about too much.

That's mostly due to the fact that the reason is a small (but important) one: a win for Washington would mean a small boost to the Memphis Grizzlies' lottery odds, meaning there'd be more ping-pong balls capable of placing their first round pick -- controlled by Boston if it falls outside the top eight -- within the range preventing it from conveying before next year (when it is only top six-protected) or beyond (when it becomes unprotected). 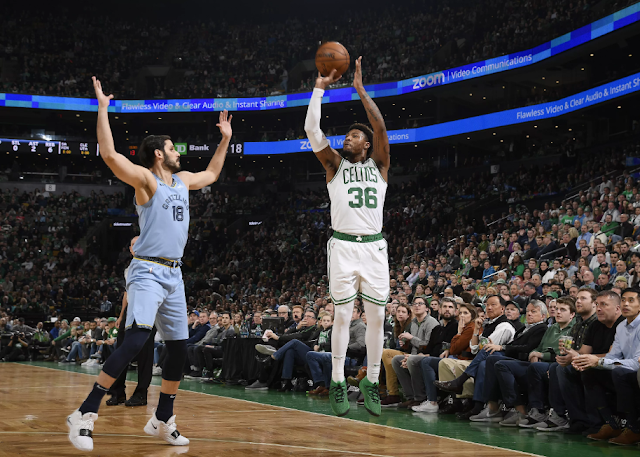 Wait - why would we want to pass on getting a pick we could use in a deal for a certain player this summer? Well, let me explain. Memphis is currently furiously trying to deliver that pick to the Cs this year, as they have a very bare roster with only Kyle Anderson and Jaren Jackson Jr. under contract past 2020-21, when the pick becomes unprotected.

Like it or not, in a small market with few tools to build a team with, draft picks are the primary tool they have at their disposal to snag top-tier talent, particularly with the league cap situation likely to get much better over the same period. While certainly not written in stone, there's very little chance this team will be a playoff team for several years as a result, and will reside in the lottery as result.

It helps keep the Memphis pick from conveying if Washington wins. Lots can change in the lottery, but every little bit helps.
— Keith Smith (@KeithSmithNBA) April 8, 2019


Memphis has struggled to get off of the obligation now, as they still have Mike Conley, who they will probably trade for young players and maybe a first round pick, and want to position themselves to tank hard sooner, so they don't risk losing Jackson Jr. in free agency if they whiff on the early picks in their rebuild, particularly if they don't land any good talent with cap space in the interim.

Given Tony Allen is probably the greatest free agent signing they've ever had, competing with a washed-up Damon Stoudamire, declining Vince Carter, an also-washed Allen Iverson (for three games before requesting a release, at that), and the busted-knee-having Chandler Parsons should give you a clear picture of the kind of talent the team has been able to add in the past two decades.

This part is really key here.


The added possibility that the league might do away with "one-and-done" NBA Draft rules the year the pick would become unprotected means that draft could see both current qualifiers (a year out of highschool) joining high school seniors means it could be one of the deepest drafts ever assembled, so together, the odds of having an unprotected pick for a team that might be very bad whether it wants to or not is reason enough to cross our fingers and accept -- even welcome -- the L.