2nd-round schedule vs. Bucks is out, & Smart might have time to return


The schedule for the much-anticipated second-round matchup between the Boston Celtics and the Milwaukee Bucks is set, with the two teams slated to meet this Sunday, April 28th at 1pm EST. 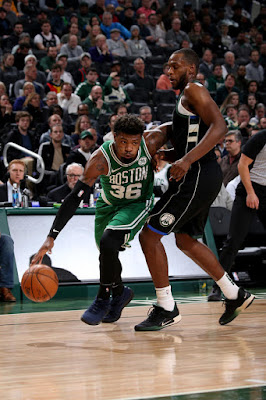 The schedule, sorted out after some clarity on the length required to get both East and West teams sorted so they won't drift too far apart in timing based on the length of each respective series, continues with Game Two to occur on the following Tuesday, the 30th of April (tipoff listed at present as "TBD"). Both Game One and Two will be in Milwaukee, as the Bucks hold home court advantage.

Game Three will occur at the end of that week, on Friday, May 3rd (time TBA as well), though the series then shifts to Boston for this and the following game, which will fall on Monday, May 6th, tip-off to be determined.

This is where things might get interesting if they haven't already gone south; assuming Boston wins at least one of the first four games, we arrive at the date of Game Five. Back in Milwaukee on Wednesday, May 8th, the game falls on the earliest date of Marcus Smart's return from an oblique tear that kept him out of the first round of the 2019 NBA Playoffs.

Don't get too excited, though, because he may not yet be able to play well enough to have a major role; he might not even if this series goes to seven games -- and Bucks guard Malcolm Brogdon might be on track to return from injury about the same time and in the same likely shape, so this may not pack the punch needed to get past Milwaukee on its own.


If needed, Game Six will be back in Boston on the 10th of May (as with all but the first game, time TBA), and Seven Monday the 13th -- and if Boston is likely to carry this season, it's not improbable we'll be watching at least one of these latter two contests.