Win over Warriors had it all - fun, facilitation, fury - and a common goal


Last night's blowout of the Warriors on the road had it all. Feisty, unselfish play - fabulous ball distribution - a pissed-off DeMarcus Cousins - Celtics teammates having each others' backs - and Boston's crew just having fun. It is amazing how an important common goal can bring contentious members of a group together. This important win had it all. 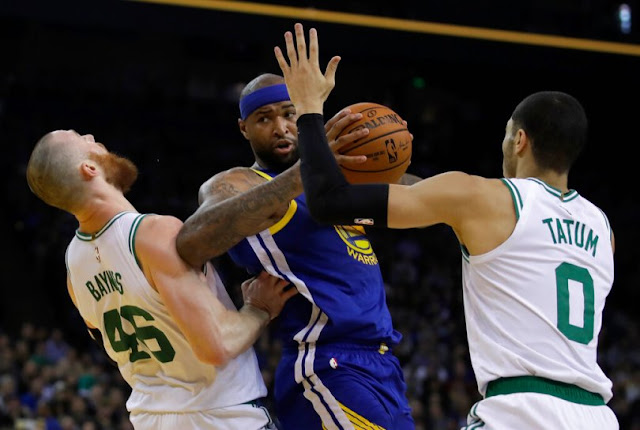 Kyrie Irving screwing around and the bench going nuts when he nails one - that describes the night. So does the total of 38 assists from the guys in green. Kyrie tried to keep things low-key, but he was obviously excited by the assist total and the implications that can have for the post-season.

Aron Baynes failed to score in this contest, but he snagged five rebounds and had three assists in only 14 minutes. But a pissing off Boogie Cousins and getting the backup from Terry Rozier and Jayson Tatum was the sequence that got our attention. Expect more of the same if the two teams meet in the Finals. And as far as T-Ro - nine points, five boards, five assists. The following is from one of our CelticsLife readers:

David Anthopoulos
Not one Celtic had a negative plus/minus last night, and Rozier was second to Hayward's +32 with a +25 on just 9 points on 3 for 7 shooting and no made threes. I didn't realize they give that many +/- points for standing up to Cousins!
Brown was next with a +23 on 18 points, continuing his good play. All three of course came off the bench.

Boogie Cousins has posters of Aron Baynes in his bedroom #GoCougs pic.twitter.com/gf4RHWRLjq

Gordon Hayward once again reminded us that his game has not plummeted into obscurity (30 points, 7 boards, 4 assists, 2 steals, +32). The young Jays took flight with a combined 35 points, nine rebounds and only two turnovers. Marcus Smart just keep cruising along, proving why Danny Ainge adores the guy. Daniel Theis? Two points, four boards, four assists in 11 minutes. Last night, we saw a team - not a group of individuals trying to prove their worth. It was delightful.