It wasn't the fact that Gordon Hayward took the game-winning shot with two seconds on the game clock. It was the WAY he did it!. Gordon took the ball the length of the floor - pulled off a Paul Pierce-like stutter step - and then hit a difficult hang-in-the-air, falling-to-the left baseline jumper. And he did this on the second night of a back-to-back, It is difficult not to get excited by this! 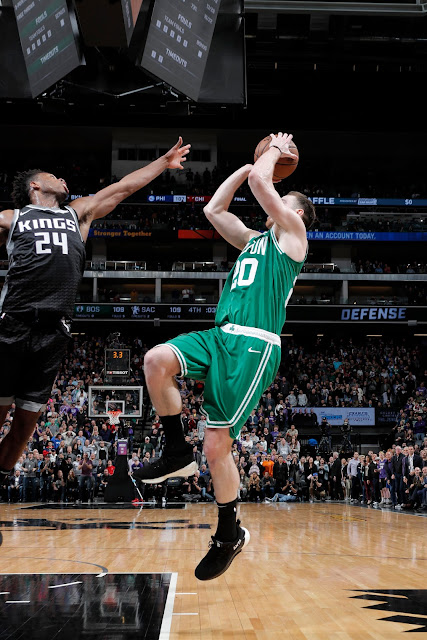 Hayward scored 12 points on 60% from the floor after notching 30 points on 75% shooting versus Golden State the night before. Just when many were counting Gordon out as a vital part of the post-season - here he comes looking like Paul Pierce.

Hayward also grabbed three rebounds and assisted on five hoops while adding a steal, showing once again his versatility. Assistant Coach Scott Morrison is the guy that has worked hard to help Hayward find his way back to the player he really is, and I recommend listening below to what Scott had to say - the crux of it being that Gordon is getting more of an opportunity and more touches - and that Gordon makes good decisions with the ball in his hands, but often that decision is to give someone else a shot. Count me as one that truly wants this great story to continue with a story-book ending.