Let's face it. These two teams just don't like each other. Philly's 118-115 victory over the depleted Celtics roster had it all - antipathy, physical play and intrigue. All blockquotes are per Philly.Com's David Murphy: 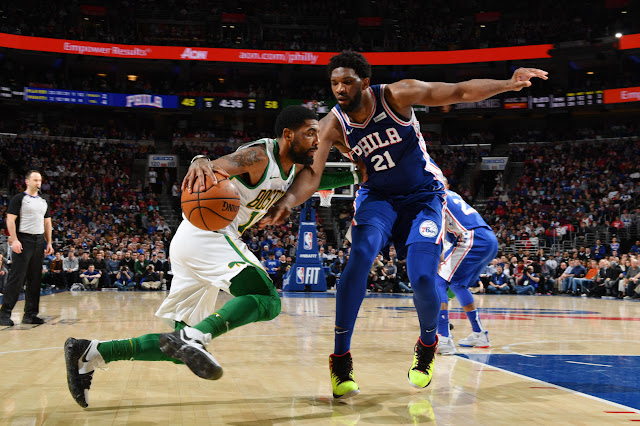 Marcus Smart could not have known the beast he would unleash when he took exception to a hard pick and sent Joel Embiid sprawling face first to the court with a two-handed shove to the back early in the third quarter. The Celtics’ physical, picket-fence defense had again taken Ben Simmons out of the game, shutting off his driving lanes and leaving Embiid to shoulder the entire offensive load. Jimmy Butler and Tobias Harris might as well have been locked in a broom closet somewhere deep in the bowels of the Wells Fargo Center. For the 11th time in 13 games, there was no question about who the better team was. And with the playoffs less than a month away, the thought of winning a series against this team seemed a laughable proposition.

The Celtics are a bad matchup for this Sixers team. In Marcus Morris, they have a player perfectly endowed to keep Simmons away from the rim. In Irving and Terry Rozier, they have two of the exact sort of guard that has long caused the Sixers’ perimeter defense fits. In Brad Stevens, they have a head coach who has already spent a playoff series devising ways to stop this franchise’s supremely talented yet odd-fitting cornerstones. The most favorable consequence of Wednesday night’s win might be the game it cost Boston in its quest to avoid opening up the playoffs on the road against the Pacers. In order to reach the NBA Finals, the Sixers might need to go around the Celtics rather than through them.

"Odd-fitting cornerstones" is an interesting analysis of Embiid, Ben Simmons, Jimmy Butler and Tobias Harris, but that is a thought held by many NBA analysts. But Murphy is correct about the Celtics being a bad matchup for the 76'ers - and that Philadelphia may have to go around Boston to reach the Finals. That is the intrigue I mentioned previously.

They (76'ers) are not a conventional team. They have a point guard who doesn’t break physical defenders down the way traditional ballhandlers such as Irving and Rozier can, and who needs to get to the rim to feel comfortable taking a shot. They have a shooting guard in JJ Redick, whom the Celtics spent the first half targeting on the defensive end of the court. Redick played one of his best defensive games of the season, but it was just barely enough.

The fact that despite not having Gordon Hayward and losing Aron Baynes and Smart, this game was close. Deficits in free throws attempted (43-to-16, 76'ers favor) and rebounds (54-to-46, 76'ers favor) certainly played a role in Boston's loss.

If the playoffs started today, Philadelphia would meet the Detroit Pistons in the first round, and Boston would face the Pacers. Even Philly followers think that the Celtics may have the 76'ers number, and a first-round meeting of the two rivals may not come out well for Philly. With 11 games to go, Boston is still looking for consistency.