Marcus Morris and Jaylen Brown jump on the "not worried" train 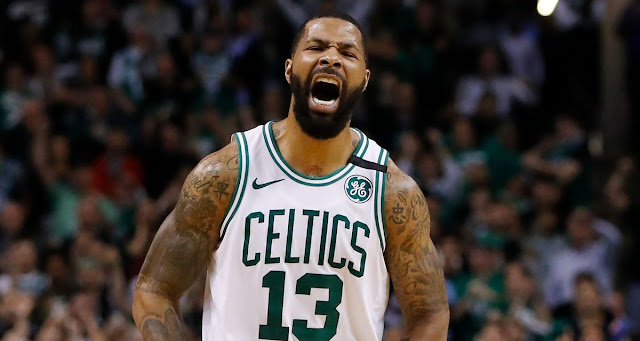 Boston Celtics forward Marcus "Mook" Morris is known as one of the more intense players on the roster. Anyone who's ever seen him ball knows he wears his emotions on his tatted sleeves, leaving it all on the floor every night.

Post a dreadful 4-game losing streak that saw Boston sleepwalking for the majority of their battles (they should've been battles, but they were mostly beatdowns) with the Toronto Raptors, Chicago Bulls, and Portland Trailblazers, it was interesting to see the normally-intense Morris be the team's calming influence.


We gonna get it together don’t sleep Boston! Bounce right back!
— Marcus Morris (@MookMorris2) March 1, 2019


Recently, Kyrie Irving also spoke of his confidence in the team, stating in so many words that no one can beat the Celtics when they play the way they're supposed to. I, for one, completely agree. The proof is there. When the Celtics play hard and play together, they usually come up on the right side of the scoreboard. Problem is, while the evidence is evident, the consistency and effort are not.

Morris' words must've had some impact as the Celtics responded with a victory on Friday night against the Washington Wizards. While the game was too close for comfort, the Celtics previously-patented defense extended a five point lead late in the 4th to seal the double-digit "W".

As the Celtics prepare for an afternoon matchup today versus the offensive-powerhouse-from-Houston, Jaylen Brown, who was stellar defensively Friday shutting down Bradley Beal when he was guarding him, doubled down on what Mook and Kyrie have been saying.


After today's matchup against the Rockets, Boston will embark on a 4-game West Coast trip, looking for wins against the Golden State Warriors, Sacramento Kings, and revenge against both LA teams jockeying for playoff position.

What do you think? Are you confident/not worried about the Celtics the rest of the way? Let us know in the comments below.