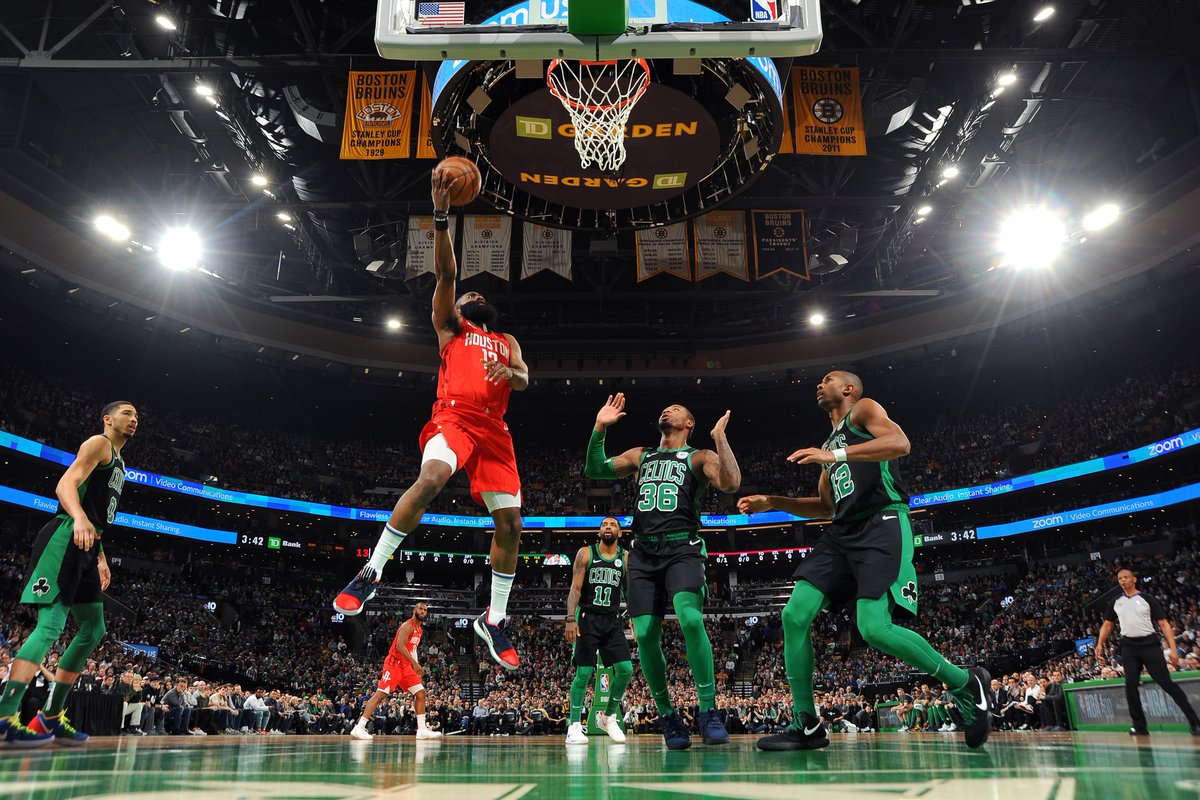 The Celtics, looking to continue moving forward from a bad recent stretch, failed to capture a win at home on Sunday afternoon when James Harden (42pts/7reb/4ast) and Eric Gordon (32pts) powered a 115-104 Rockets win.

Houston may be known for their high-caliber offense, but it was their defense early on that set the tone. The Celtics turned the ball over five times in the first five minutes of the game, giving Harden and company easy buckets in transition. The Rockets forced a total of six turnovers (four of which were steals) in the 1Q and scored 10 points off them.

While Kyrie Irving and Al Horford both had strong starts for the C's with seven and six points respectively, it wasn't enough to match Houston's scoring. Harden (13) and Gordon (11) could not be stopped in the first quarter, outscoring Boston 24-17 alone to start the contest. They shot 9-13 between the two of them, getting virtually anywhere they wanted to with the ball.

Between Boston's turnovers and defensive miscommunications, the entire first quarter was an extended layup line for the Rockets. They went on to outscore the Celts 16-4 in the paint - most of which were wide open lay-ins or dunks - and open a double-digit advantage.

The Celtics' second unit couldn't right the ship defensively. Chris Paul started heating up, orchestrating an efficient offense that built a larger lead. Within three minutes of play in the 2Q, Houston's lead was up to 17 on Boston.

Jaylen Brown, who has been playing very good basketball for the Celtics as of late, provided a mini offensive spurt for his struggling team. The 22-year-old had six points to spark some scoring and temporarily reduce the deficit:

The lead was trimmed to 11, but the return of Harden and Gordon stopped any momentum that the Celts may have had. The duo continued their scoring display, each scoring another 9-10 points apiece and run their team's lead all the way up to 20. In fact, Harden and Gordon alone matched all of the Celtics' offensive production in the first half (43 points).

Irving (14pts) and Horford (10pts) shot a combined 9-11 from the field and should've gotten a lot more attempts than they did. However, due to their lack of opportunities and the rest of the team struggling to score, Boston was held to under 50 points and were booed off the court at the end of the half.

The Celtics desperately needed someone to step up on offense in the second half - maybe Gordon Hayward or Jayson Tatum...instead, it was Marcus Smart who supplied a much-needed offensive surge.

The streaky shooter didn't have a single point in the first half and was shooting 0-4. As every Celtics fan knows, though, that wasn't going to stop Smart from shooting the ball. With just three more shot attempts in the 3Q, Smart poured in 16 points - contributing nearly half of Boston's point total in the frame. He knocked down three treys and was 7-7 from the free-throw line.

That being said, it was the same old story for Boston's defense. They got sliced and diced by the backcourt pairing of Harden and Gordon, who put up another 14 and 11 points. They both had over 30 points by the end of the quarter and as a team, they had put up 100 puts, putting an early Lawler's Law into effect.

Both squads were going basket for basket through the quarter...literally:

The two units ended the 3Q knotted up at 35 which, for the Celtics, wasn't really good news as they still trailed by 22.

The rest of the Celtics roster finally came alive in the fourth. With most of the starters on the bench, the Celtics started the quarter with an 8-0 run. Tatum, Hayward, and Brown quickly scored the first 16 Celtics points, taking a good chunk out of the Houston lead:

Hayward gets into the lane and goes to work! pic.twitter.com/zZH5NlAVTb
— Boston Celtics (@celtics) March 3, 2019

This Brown dunk in transition brought the Celts all the way back to within 10:

The Beard had an answer, though. Harden continued to knock down his typical impossible-looking bombs from long range to keep the Rockets hovering around a 10-point lead. When he fouled out of the game and the Celtics further cut the deficit to eight points off this JB dunk, it looked like the Celtics could perhaps make one final late push:

But the burst came a little too late for the Celts and, down the stretch, they failed to get simple defensive rebounds that would've given them a potential chance. PJ Tucker had a key offensive board (his fourth of the game) and steal to take away any other chances Boston could have.