For the Celtics, being happy might just have been the missing piece


If there is a regular-season corner to be turned, it may have finally happened.

Nothing magical, nothing deep, just getting sick of the negativity and choosing to enjoy their time together seems to have made a noteworthy change in the Boston Celtics, and at least so far, it's been translating into wins, even against the mighty Golden State Warriors. 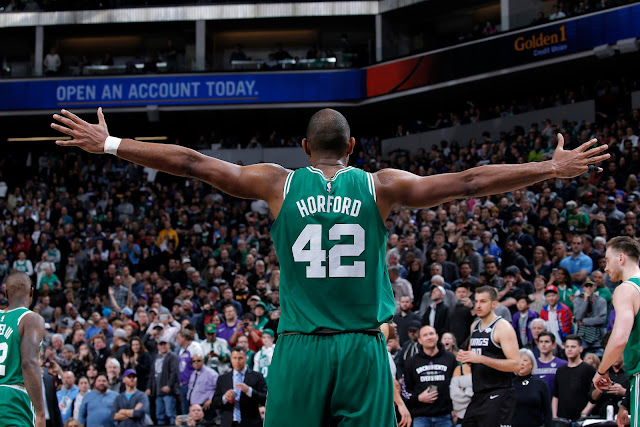 Frankly, I don't really care anymore. All my expectations for this team have been sandblasted away by reality, leaving only the appreciation of watching basketball, particularly when the uniforms are green and white. I suspect, for the Cs, the season's reached a similar point.


Brad Stevens: "Every team has to find a togetherness in competing. Some teams it takes 60 games, some teams it takes 20 games and bad teams never get there. You hope it took us 60 games, but we'll see. We haven't proven ourselves to be great at that yet for a long stretch."
— Brian Robb (@BrianTRobb) March 7, 2019

Jaylen Brown just sprinted into the tunnel with a gigantic smile while laughing and yelling. Vibes.
— Chris Grenham (@chrisgrenham) March 7, 2019

I'm not going to look for solutions, or beg for changes, as the very thing we've been clamoring for -- rotation changes, shorter hooks and quicker timeouts in runs, for example -- are coming from coach Brad Stevens over the last two games, and the players seem like they truly enjoy each other's company for the first time since I can't remember when.

Gordon Hayward looks confident and competitive, even if he's not quite back to form. Marcus Smart's spending large chunks of his birthday interacting with fans on social media in a decidedly ebullient manner, and Kyrie Irving doesn't really care what the media thinks, nor is he losing any sleep about trying to demonstrate leadership, at least compared to weeks past.

Kyrie with a big hug for Hayward and some of his other teammates, then goes over to Yabu and Theis and rubs their heads again lol.
— Jay King (@ByJayKing) March 7, 2019

Aron Baynes is back on the court, baiting Boogie Cousins into techs and uniting the team with his selflessness while Jaylen Brown's locking down the league's most deadly shooters and ball-handlers consistently -- even Marcus Morris is showing signs of breaking out of his recent shooting funk, while diving  for loose balls like the other half of the Marci.

Whether or not this lasts may be key to how deep Boston can hope to go in the postseason, and when I say "this", I'm not talking about winning; I'm talking about doing something you love with people you care about, which tends to get you to the same place in the long run, at least in this game.


Marcus Morris said he “took a page out of Smartie’s book” when he dove on the floor to save a possession late. Said he “sctratched the shit out of” his knee though.
— Jay King (@ByJayKing) March 7, 2019

I believe they can, and rather than wring my hands about whether they've "turned a corner", I'm going to sit back and watch some enjoyable Celtics basketball until there's none left to watch. I hope that attitude turns out well for all of us.