Celtics bracing for Wednesday night showdown with the Sixers 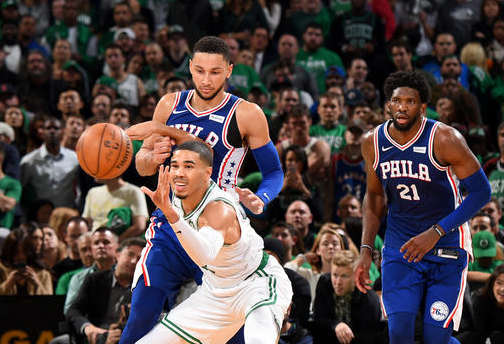 The latest chapter between the playoff-bound Celtics and 76ers will be written on Wednesday night and the outcome could determine which team will enjoy home court advantage in the opening round of the postseason. As of this writing, Boston trails Philadelphia for the fourth seed in the East by 1 ½ games but there is still plenty of time left on the schedule to close that narrow gap, and Wednesday night will undoubtedly be marked on the calendar for both squads as a pivotal game for each. The oddsmakers have not begun dealing a line on this contest but if you’re inclined to bet a bunch when you’ve got a hunch, or ever had an interest in how to bet, then click on over to Sportsbook Review and take a look at the odds from all the best online sportsbooks.

The Celtics are fresh off of a 126-120 shootout over the Sacramento Kings and should, we repeat should, have a gimme game at home against the lowly Hawks on Saturday afternoon. Hopefully, the Green is not looking ahead to Monday night when the golden Nuggets come calling on Causeway because at this juncture of the season, Boston needs every win they can get if they are to overtake the Sixers for the fourth spot, and perhaps even leapfrog the Pacers for the No. 3 seed, currently only two games in front. The Celtics have now won four of their last five but if it were not for Kyrie Irving’s second career triple-double (31 points, 12 assists, 10 rebounds), Boston would never have been able to evaporate a deficit that reached as high as 17 points in the first half. The C’s will have to be ready to roll come Wednesday because a team the caliber of Philadelphia is disinclined to give their archrival any Lazarus-like opportunities.

As the season draws to a close, the 76ers have been unable to go on a winning tear and shake the Celtics from their rearview mirror. Recently, Philadelphia dropped a 108-107 decision to the Bulls in Chicago and was blown out 107-91 two days later in Houston. However, they returned home to the City of Brotherly Love and rebounded with a huge win over the Pacers and then dispatched the short-handed Cavaliers in an underwhelming seven-point victory. Before the Sixers lock horns with the Celtics, they will host the Kings then take to the highway against the Bucks on Sunday and the Hornets on Tuesday night which means Boston will be getting the Sixers on the second leg of back-to-back games. Good news for Boston but only if they can capitalize on their scheduling advantage.

Boston has won and covered the number in all three games against the 76ers this season, with the most recent being a 112-109 victory in Philadelphia on February 12th. In that game, Boston was without its resident superstar Kyrie Irving who had sprained his right knee in the previous game, but Gordon Hayward stepped up and led the team with 26 points including the go-ahead 3-pointer with 1:50 remaining to help the Green triumph over their Atlantic division foes. That victory continued a pattern of dominance over Philly as the C’s have won 13 of their last 16 meetings, but this will be the last regular season tango between the two and a game that is infinitely more important than the other three this year. Barring an unforeseen injury or ailment, Irving is expected to suit up in this pivotal match while all appear healthy on the 76ers as well. But if the Celtics are to prevail, they will need to avoid the easy transition buckets they have allowed recently and their abysmal first quarter shooting. So kick back, grab a cold one, and see if the C’s have what it takes to win a crucial game that could go a long way to determining whether or not their opening round of the postseason will be set in Boston.