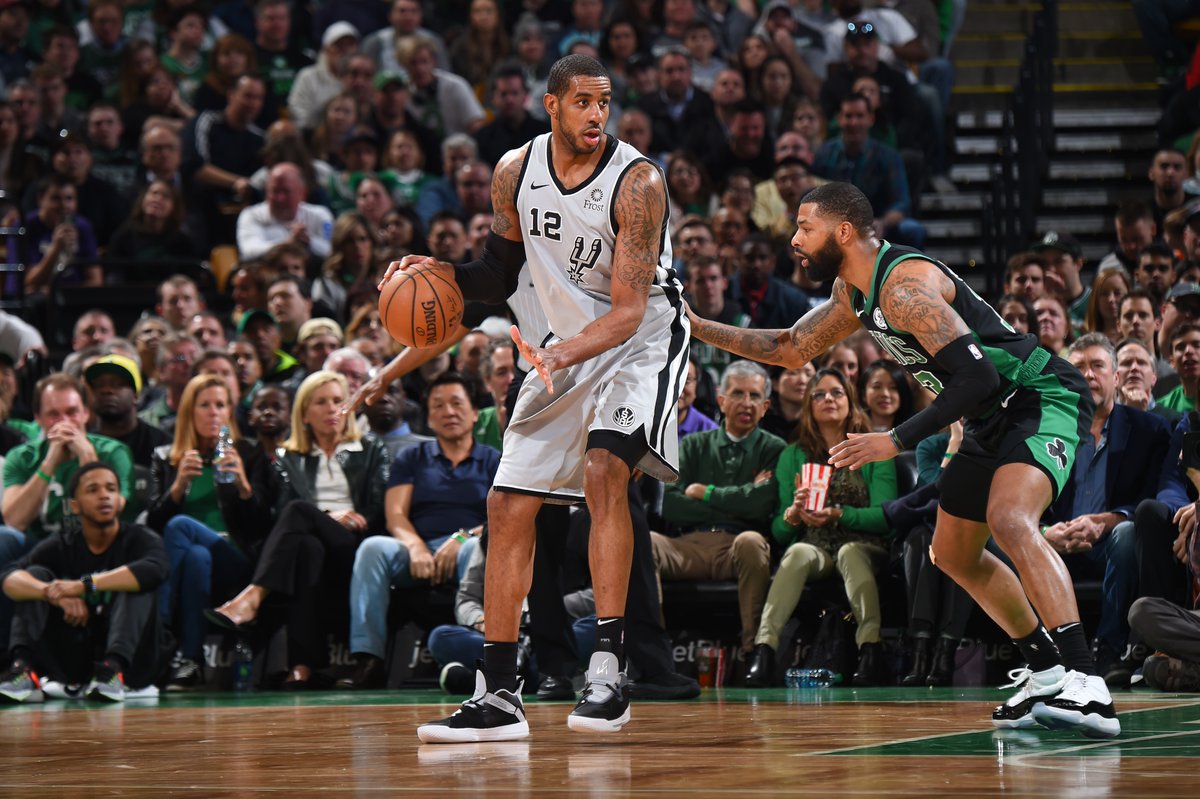 A banged-up Celtics squad hosted the San Antonio Spurs in Boston on the second night of a back-to-back. San Antonio, losers of two straight but winners of eight of their last ten, came into Boston with soemthing to prove and, led by LaMarcus Aldridge, cruised by the Celtics to capture a 115-96 victory.

With a banged up Celtics frontcourt, Coach Popovich and his Spurs ran their offense through big man LaMarcus Aldridge. The 6'11" big man was unguardable out of the gate, scoring a quick 19pts on 9/15 shooting. He was a mid-range assassin, and his hot start was too much for the Celtics to keep up with as the Spurs built a small lead:

Morris was the go-to guy for Boston early on, matching Aldridge's jumpers with some mid-rangers of his own. Mook opened with eight points without missing a shot (4/4). Between his sharp shooting and some nice offensive possessions for the Celtics, they were initially hanging around with the Spurs.

Smart did his best to keep it even...

...but Aldridge and company were too much to handle, giving San Antonio a seven-point lead after 12 minutes.

The good news for Boston is that Gordon Hayward was having one of his better days. The forward was filling in for Jayson Tatum in the starting lineup and was very active on the floor. Hayward scored 11 points and grabbed three boards in the second quarter, adding to his statline to finish the half with an encouraging 13pts/6reb/2ast:

It was a great sign to see Hayward attacking, considering the Celtics are 9-0 when he takes over four shots in the paint in a game.

Still, the Celtics were missing a lot of shots. Boston was 2/17 from behind the arc and struggling shooting from the field as a whole, going 38.6% through the half. DeMar DeRozan and the return of Aldridge instantly sparked San Antonio's offense yet again, as DeRozan scored his first six points and Aldridge scored another six himself. This duo combined for over half of the Spurs' 23 points in the frame.

Despite Hayward and Morris both scoring in double-digits, the Celts couldn't chip into the lead by the end of the quarter and finished the half trailing the Spurs by seven:

Once again, the Celtics defense had no answers for the Spurs star duo in the second half. Brad Stevens tried adjusting the gameplan by having his squad double-teaming the big man at times, but to no avail. Aldridge still found ways to get open or find open teammates, adding another 11 points, three rebounds, and two dimes in the quarter alone.

DeRozan scored another 10 points himself, combining with Alrdige to again score the majority of San Antonio's points - 21 of their 30 to be exact. Many of these points were from open looks but even when contested, they were knocking down their looks at a high rate.

The Celtics offense couldn't get much going in the third, but Daniel Theis provided a much-needed source of scoring and rebounding off the bench late in the quarter. Theis had a quick eight points and five boards, doing a great job maneuvering and finishing in the paint:

Kyrie quietly had a solid frame as well, racking up seven assists and five points, but the Celtics below average offense ultimately put them down by double digits going into the fourth.

The Celtics still had no answers on either end of the court in the final quarter of play. The offense failed to score over 25 points in any quarter, and at the other end, Aldridge continued his utter dominance:

The Spurs forward ended the night with 48 points with a whopping 20 field goals (over 66% shooting). He scored more points by himself than Boston's top three scorers combined.

There weren't really any highlight plays for the C's in the 4Q, as they saw the Spurs continue to jam it down their throat. The end result was Boston's fourth-stright loss in an ugly 19-point defeat at home.