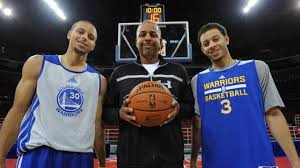 With little if any fanfare – other than a through-the-roof usage rate – the 2018-19 campaign marks the 40th season during which the NBA has utilized the Three-Point Field Goal. Ironically, the adoption of this new wrinkle to the game coincided with the arrival of two dudes named Earvin and Larry Joe.

Initially, the league’s old-schoolers frowned upon the long ball despite its inherent lure of a 50 percent increase in payoff. It was not until its sixth year (1984-85) that the average NBA team was even attempting three treys per game. It was not until Year 14 (1992-93) that the usage rate for the three-ball, or 3PAr, crept past 10 percent – that is, one out of 10 shots launched from behind the arc. 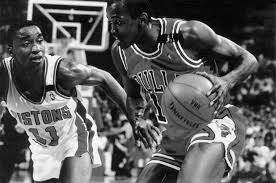 Two seasons later, Commish David Stern and his minions decided to enhance the allure of the long-ball by flattening out the arc and shortening the distance to 22 feet. Predictably, both usage (9.89 to 15.30 attempts per game, an increase of over 60%) and accuracy (.333 to .359) were significantly elevated.

The experiment was abandoned after three years following the 1996-97 season, but its impact reverberates still today, over two decades later. Consider these seasonal averages:

Since the turn of the century, the National Basketball Association as a whole shot worse than .350 from Three-point Land only once – during the labor-shortened, condensed 66-game schedule of 2011-12 – when it plummeted to .349. The usage rate for three-balls during that funky season was .226, the fifth consecutive season at 22 or 23 percent (about 18 attempts per game per team). Since then?

The Impact of “Striping” 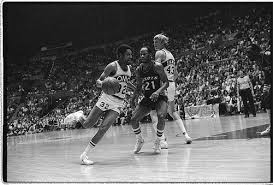 NBA 2015-16 will ever be remembered as the Year of the Warriors and Cavaliers – something about 73 regular-season victories and overcoming 1 – 3 playoff deficits.

It should also be noteworthy for a dubious distinction “achieved” by both the Milwaukee Bucks and Minnesota Timberwolves. These franchises are in danger of becoming the last two teams ever to accumulate more missed free throws than successful three-point shots over the course of an 82-game slate.

As recently as 2010-11, there were a dozen squads that fell into that “Negative Striping” category, four of whom qualified for post-season play – and it hadn’t been until the 2007-08 season (Year 28 of Three Ball) that the average NBA team tallied more treys than missed FT’s.

But 2018-19 seems as if it will become the third consecutive season in which all 30 teams end up with more treys than errant freebies.

The Most Deadly of the “Sniper Brigade” 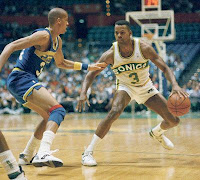 It’s not so much that today’s elite three-point shooters are so much better than the dead-eyes of the past … it’s just that the Manute Bol’s are now finding the range, too!! 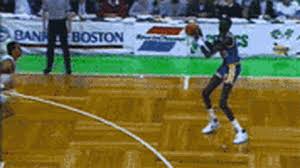 The usage rate for the three-ball has never matched or exceeded league-wide accuracy … but the usage rate has increased by a full TWENTY-FIVE PRECENT just since the Splash Brothers etal’s iconic yet ultimately unsatisfying ’15-16 run.

Have these last three “bombs-away” seasons become the new NBA norm – Holy D’Antoni. Batman! – or is this recent rash of free-wheelin’ distance shooting merely a “blip” on the screen of hoops history and the Three-pointer will start acting its age?

If you’ve ever wondered about the origins of the three-point field goal or how it became set at such an odd distance of 23’9” – Hall of Famer Bob Lanier’s feet were still too big for him to legally attempt a corner trey – check out this little version of “The Odd Couple” from Abacus’ vault.