The Lakers love to tamper - but does the league actually care?


The Los Angeles Lakers ought to know better, but given it's Magic Johnson and Rob Pelinka we're talking about, I'm willing to extend the benefit of the doubt. 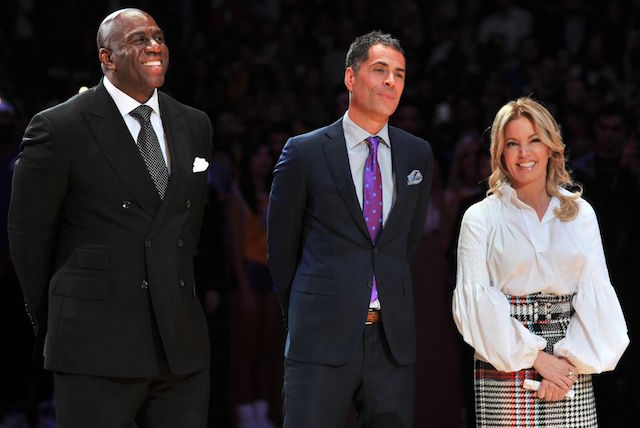 Regarding what, you ask? Why, tampering, of course! Those zany guys, plucked from obscurity and thrown into a romping, feel-good movie for all ages...what's that? These guys have been working in the league for decades, and literally have no excuse whatever for the crap they've been pulling and ought to be hit with the loss of a draft pick, you say?

Well, I guess when you put it that way, I don't have much of an argument against it.

We are now on our third such tampering investigation with the Lakers organization just inside of a year, the first of which saw Magic get hit with a hefty fine for his comments about another team's player (Giannis Antetokounmpo). He was new on the job, and perhaps not used to being so constricted in his public speech, known for saying cringy things on Twitter with little in the way of consequences.


More recently, his almost-certain collusion with Klutch Sports agent and LeBron James best bud Rich Paul to attempt to force a trade of Anthony Davis from the New Orleans Pelicans to the Lakers prompted a request from the Pels to investigate tampering yet again, and now, with Ben Simmons reportedly interested in studying with Magic himself as tall-ass point guards or some dumb bullshit has launched a third such investigation.

What's the big deal, you ask? Can't a wicked tall floor general learn from another in peace? Sheesh!

Let's take a look here - who is Simmons' representation? Oh, gee, wow - it's Klutch. Ben's favorite player? LeBron. Did I mention the newly brave three-point shooting one (OK, that may be an exaggeration, but I'm trying to be chill, guys) happens to be a restricted free agent the summer after next?

There seems to be a pattern here, folks.

It's not like Magic sat on the set of Jimmy Kimmel and mocked the very concept of tampering, after all.

HOLY SHIT, HE TOTALLY DID!

After the Lakers were warned about tampering by the league following new team president Magic Johnson's cheeky comments on Jimmy Kimmel, Shaw reconsidered whether to participate in the fishing trip and in George's fishing competition, which was being held Aug 13 at Castaic Lake.
— Ramona Shelburne (@ramonashelburne) January 3, 2018


In all seriousness, when I set out to write this piece, I earnestly meant to downplay the impact of tampering, because it's so easy to do by mistake. But the more I've looked into a certain tall-ass, retired point guard now leading the show in silver screen country, the harder it got to convince myself these repeated, seemingly calculated measures were anything but intentional flouting of league rules. I do think it wise to consider most infractions worthy of warnings, and perhaps repeat unintended such actions cash fines.

But if the league is going to have these rules, it needs to enforce them consistently, and when they are brazenly ignored, they need to enforce them with an equal gravity to correcting such behavior. For the case of the Lakers, I think they may have self-flagellated themselves out of the AD sweepstakes with such weak, ham-handed machinations - but the league ought to go further, formally barring any such move via trade (he can sign there outright if they want to wait a season with an open roster slot as far as I am concerned), and take at minimum a second-round pick out of their warchest to bestow on the Pels for their trouble.

I don't want to advocate for the same for the 76ers on the day we'll be facing their revamped roster, either, but given the situation, it might not be a bad plan - if other teams see they can get away with this sort of behavior, it could become the new normal, transforming the league into more of a telenovela than it already is. And on that, I think most of us are quite good.