Enes Kanter signs with Portland as the buyout market slims


I still haven't made up my mind if we missed a great opportunity or dodged a bullet, but Enes Kanter is no longer a buyout option for the Boston Celtics, having signed a deal with the Portland Trailblazers. 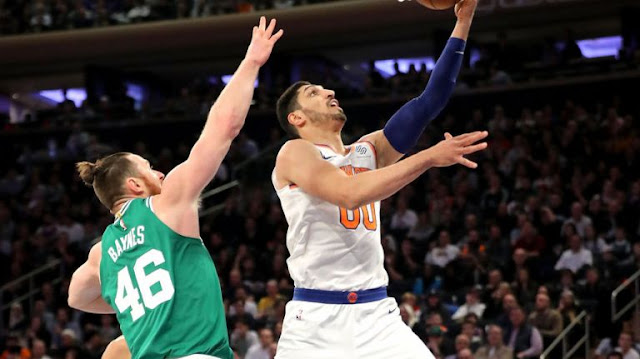 Kanter, who has a reputation as a terrible defender, has actually been a respectable one on teams looking like they'll make the playoffs, so that aspect of his game may be a little overblown. But as a big man with no away-from-basket game in the modern NBA, even his prodigious rebounding and solid-if-limited offense has a downside.

Many presumed he'd look for a team with a need for a more traditional big that could play him big minutes, making a fit with Boston questionable at best.  However, this surprising move puts Kanter in the mix for presumably the backup role with the Blazers, cutting into sophomore backup center Zach Collins' minutes significantly despite his need for development and considerably stronger skillset in the modern NBA.


Blazers beat a crowded field for Kanter, including the Lakers, per sources. Kanter is an important addition for Blazers, where he'll play a good share of minutes. Portland signed Kanter to a $70M offer sheet in 2015, which OKC matched. https://t.co/1Qdd1Ff43G
— Adrian Wojnarowski (@wojespn) February 13, 2019

Expect the Cs to focus on other targets like Markieff Morris and Robin Lopez now that Kanter is off the table for the club; while it may be up for debate as to whether he'd have been a good fit, the fact he did not end up with the Philadelphia 76ers or another East squad will at least keep the path to the NBA Finals a little less cluttered.