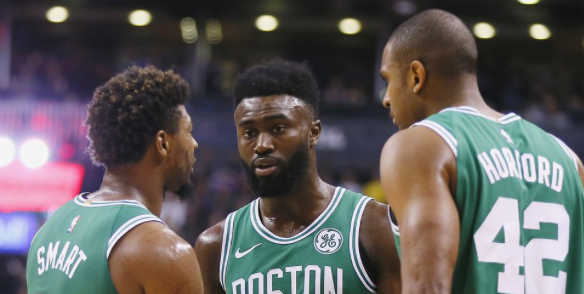 Celtics fans woke up Wednesday morning with a hangover. No, not necessarily induced by alcohol, although if you were able to struggle through watching their putrid performance on Tuesday night in Toronto without an adult beverage then you have our congratulations. If you had clicked over to Sportsbook Review prior to tipoff, you would have seen that the best online sportsbooks like Bovada were dealing Boston as 3 ½ point road underdogs. Let’s just say that was a rather optimistic line after the 118-95 whooping they took from arguably the best team in the East. It was their worst loss of the season and hot off the heels of a lackluster performance in Chicago in which they lost 126-116 as 10-point favorites. If the Celtics sink any lower, they will be digging a hole in the basement.

Marcus Smart had this to say about Boston’s recent woes, "What are the main ingredients to those collapses? Not being together. And that's it. We're just not together. Plain and simple. That's it. Because if we were together, that wouldn't happen. We're all talking and linking up, but like I said, it's something we're going through, and it's something we're going to have to continue to work at and figure it out."

Smart is right. There is a lingering malaise looming over this club and the storm emanates from down on the bayou. In New Orleans brews the specter of a game-changing nightmare in the form of a 6’10” tower of power named Anthony Davis. Word from the top is that the Celtics’ brass is all-in on dealing for arguably the best player in the world. But in order to procure his services, the Pelicans will demand a sweet in return which means the likes of Jayson Tatum and a few of his friends could be out the door, in addition to a first-round pick or three, while Davis joins Kyrie to form the most ferocious duo in the NBA.

There are plenty of moving parts to this potential blockbuster deal but the crux of it is convincing Kyrie Irving to stay put in Boston while the teams negotiate a deal to bring Davis to Boston. But in the interim, the pawns in this affair are playing for the Celtics knowing that their days in Boston could very well be numbered. And what fans don’t quite comprehend is that professional athletes might have glamorous jobs, but they are jobs, nonetheless. Like the rest of us, morale ebbs and flows which manifests in a job well done or a job hardly done. It’s clear the Celtics currently fall in the latter category but here’s a news flash – the Davis deal won’t happen until after the season which means the Celtics either find a way to break free from their funk or allow it to consume them and doom any chances of postseason glory.

As of this writing, Boston holds the No. 5 playoff spot in the East and with about 20 games remaining on their regular season slate, there is a chance that the Celtics could climb as high as No. 3, leapfrogging Philadelphia and Indiana. But based on their recent performances those prospects appear grim. Assuming the playoff positions remain the same, the Celts would suit up against the 76ers in the first-round. Boston has dominated Philadelphia recently, having eliminated them last year in the playoffs and claiming victories in all three meetings this year. However, the Sixers have bolstered their roster with Tobias Harris and will not only have home court advantage against a team that is under .500 on the road this season but will have all the incentive in the world to bury the flailing franchise. Yet, if the moon and stars aligned, and the Celtics managed to defeat the Sixers, can anyone but the most star-struck Celtics supporter imagine this edition knocking off Toronto and then Milwaukee in a seven-game series without home court advantage? It sounds impossible because, unfortunately, right now it is.