The Boston Celtics took down the Oklahoma City Thunder 134-129 in a national TV matchup of two of the best teams in the league. Boston had eight players in double figures, and used their depth to outlast the stars of OKC. This win ended the Thunder's seven-game winning streak, and continued the fantastic play of the C's amidst the trade deadline drama surrounding the team. 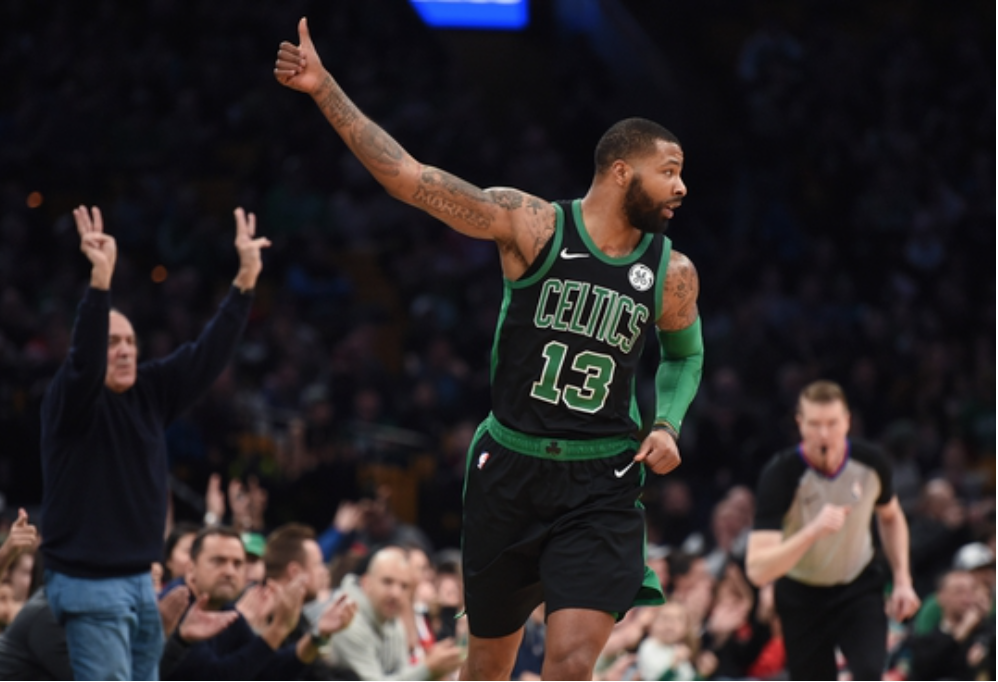 After having a few games with a clean bill of health, the Celtics were down big man Aron Baynes due to a foot injury. OKC center Steven Adams is an absolute load on the glass, and Boston could have used the big body of Baynes.

When talking about the Thunder, Paul George has become the biggest threat. Coming off of a 43 point outing in his last game, the Celtics threw multiple defenders at him and held him to just two points on 1-4 shooting with a turnover to start the game. OKC as a whole shot just 3-12 to start the game, while Boston shot 54 percent from the floor over the first six minutes, en route to an early 16-9 lead.

Marcus Smart drew the assignment of covering George early, and made his presence known by getting two steals, one of which lead to a dazzling Kyrie Irving finish on the break. Marcus Morris, Al Horford, and Kyrie carried the offensive load throughout the first quarter. The trio combined for 22 of the team's first 24 points on 10-14 shooting, not to mention a few highlight finishes as well.

Marcus Morris with a series of fakes to set up the jumper!#CUsRise 11#ThunderUp 6

A 9-2 OKC run tied the game at 26-26 late in the first quarter, but five quick points from Jaylen Brown off the bench stemmed the tide. Despite leading for the first 12 minutes, the Celtics took just a two-point lead into the second quarter.

After missing his first three shots, George caught fire late in the first, and it carried over to the second as well. The MVP caliber wing doesn't need much to get started, and he was up to 15 points in the blink of an eye.

Both teams traded baskets throughout the middle of the second quarter. The Boston bench minus Brown (12 points in the first half), couldn't get any separation with Kyrie and Horford on the bench. The offense never really slowed down, but the defense slipped as OKC left either George or Russell Westbrook on the floor at all times.

When the tandem of Kyrie and Horford came back into the game, though, things really swung in Boston's favor. After an Adams alley-oop cut the OKC deficit to just one point, 51-50, the Celtics went on a 13-4 run to open up a double digit lead, the first of the game for either team. Kyrie and Horford combined for 10 of the 13 points in that run, and Kyrie alone had 11 points in the second quarter. The effort and defensive intensity picked up over the last four minutes of the half, and Boston went into the halftime break with a 66-58 lead.

The #Celtics lead 66-58 at the half, with Kyrie Irving leading the way with 20 pts, Jaylen Brown with 12 off the bench. The #OKCThunder are led by Paul George's 17 pts. Russell Westbrook has 6 pts on 2/9 shooting, with 9 assists and 3 rebounds.

The story of the first half was the Celtics' offense. OKC has the third-best defense in the entire NBA, and Boston not only dropped 66 points on their head, but did it in an incredibly efficient way. Boston shot 59 percent in the first half, and a ridiculous 75 percent (24-32) from inside the three point line. That led to 36 points in the paint against Adams and the stout front line of the Thunder. Westbrook, on the other hand, who has been irrelevant in the shadow of George for most of the season, scored just six points on 2-9 shooting. The C's did a great job of clogging the paint and forcing Westbrook into difficult looks at the rim.

OKC opened the third quarter on a 18-7 run to take a 76-73 advantage in just over four minutes. George scored nine quick points and the Thunder went 6-7 from the floor over that stretch. Some of the run came from slow defensive rotations, but George put on his superstar hat and made some very difficult shots. Brad Stevens took a timeout after an Adams dunk to calm everything down and right the ship.

Almost as if Stevens told the team, "Hey, we can start scoring now," the Celtics came out of their timeout and went on a 17-2 run to regain a 7-point lead. Two threes from Marcus Smart, another from Morris, and a three-point play from Gordon Hayward got the team back on track. A few Westbrook turnovers didn't hurt their cause either.

Celtics fell behind by 3, then Marcus, Marcus and Marcus (Morris, Smart, Smart) with threes.

Dennis Schroder and George put a few buckets together late in the third to cut the Celtics lead back down to six, but the hot shooting of Smart (12 points in the quarter) kept the Thunder at bay.

Unlike in the second quarter, the Boston bench was able to play OKC to a draw during the non-Kyrie/Horford minutes. Even with George and Westbrook on the floor, Terry Rozier, Daniel Theis, and Morris were able to keep the C's afloat, while also giving their stars some extra rest before crunch time. Rozier and Theis combined for 15 points in the fourth quarter, and really made an impact against the OKC bench.

Nice game for Rozier. 10 points and a team-high 7 rebounds in just 17 minutes.

The Celtics played well, particularly on the offensive end, throughout the whole game, but the stars of OKC were able to keep the game within reach late into the fourth. Westbrook and George cut the lead down to just three with 2:06 left to play in the game.

As has been the case in seemingly every big national TV game, Kyrie called his own number down the stretch to help put the game away. A fadeaway jumper over Schroder and an assist to Jayson Tatum off of an inbounds play stretched the lead back out to four, but two free throws from Westbrook cut it back down to two with just 35 seconds to play. But Kyrie new what he had to do. He blew past his defender and floated a layup over Adams and Westbrook to push the lead back to four with 25 seconds to play. A Jerami Grant corner three cut the lead to one, and OKC had a chance to take the lead after Tatum missed the back end of two free throws. Down by two with just over 10 seconds to play, Westbrook turned the ball over on a drive to the paint, and Tatum redeemed himself by knocking down two free throws to give the C's a 4-point lead. Westbrook hit a free throw to draw the game within one possession, but botched the second after trying to secure an offensive rebound and missing the rim entirely.

Smart nailed two free throws to give Boston a 5-point lead to secure the win, and New England fans everywhere rejoiced that the game didn't go to overtime so that they could make it to their Super Bowl parties on time.