The Boston Celtics have chemistry issues, and it shows.

To be fair, with all of the shakeup after last year's improbable injuries and even more improbable success, mixed up even more by the Anthony Davis trade request and looming Kyrie Irving free agency, and it makes sense - but as Marcus Morris' post-game comments highlighted, it must change soon if this team is to realize anything close to its potential.

With so much uncertainty built into the situation, it's no wonder the team has been acting like a bunch of individuals, so perhaps there might be something to be said for bringing on a free agent with some roots to at least some of the roster to remedy that, and hope the vibe becomes infectious. 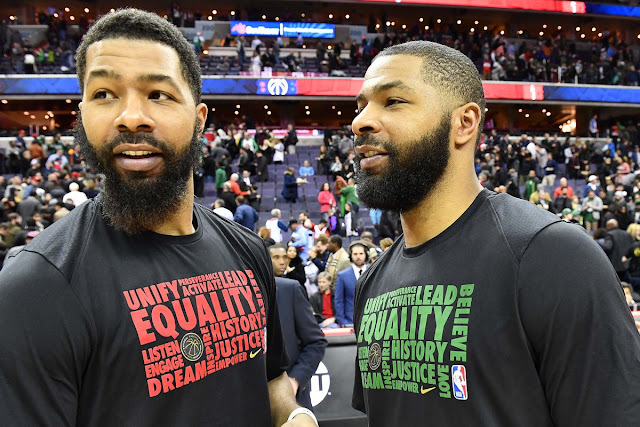 Once, not that long ago, I was not a fan of the idea of bringing on one of the notorious Morris twins, known as much for demeanor as skill on the court. Much of a season later, I realize the error of my ways in that while the bark is most definitely legit, the bite is rare and usually deserved. Now, I understand just how much of a ride-or-die guy Mook is for an organization he believes in, and couldn't dream of what this team would look like without him.


Even when he has an off night offensively, as he's had a few of lately, he never, ever hangs his head or fails to get back, sticks to his assignment like cheese to macaroni, and generally makes winning a top priority until it simply cannot happen.

We need that, and in spades.

Marcus Morris: "For us to be a championship team man, this shit has to change. When you want to win, that has to be the first goal. Whatever it takes, I’m with it. If they want to take me out of the starting lineup and get some juice in there, I’m with it. But I’m trying to win.
— Jared Weiss (@JaredWeissNBA) February 10, 2019


Cue the "if we could just clone him joke", and then throw it away, because, while we certainly cannot get another Mook by any means known to modern science, we can get about as close as it's possible to manage should he (or anyone) manage to convince his brother Markieff the Celtics are in fact a good fit.

Sure, the minutes will be a challenge, and both brothers are likely looking for a bigger payday then the $5.3, up-to-three years deal can deliver, but nearly $16 million in guaranteed money might be close to what Kieff could get as a big man entering his age 30 season.

Marcus Morris on Markieff’s next destination: "It’ll be exciting to see where he goes but, before Woj and all them know, I’ll be the first to know. Maybe I’ll leak it."
— Tom Westerholm (@Tom_NBA) February 8, 2019


There's a not-small chance he could garner more, and that a shot a ring is not worth as much to a guy who missed out on salary in the past to play alongside his brother, though, so it's a stretch at best, but if all parties were open to the idea, well, let's just say it'd help a team of individuals play a little more like brothers.