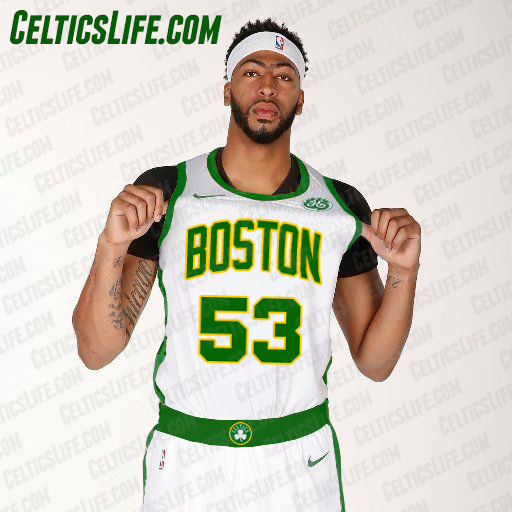 A few weeks ago, the father of All-Star Anthony Davis commented that he wouldn't want his son to play in Boston, citing loyalty issues after the Isaiah Thomas situation. But this morning, the younger Davis stated that Boston is on his list of teams he would be willing to play for:

Anthony Davis is asked about the Boston Celtics not being on his list. “They are on my list.”
— Tim Bontemps (@TimBontemps) February 16, 2019

Rumors have swirled about Davis and Kyrie Irving wanting to play together, and it looks like the Celtics might be an option for that to happen after all:

As expected, Anthony Davis’s “list” would change as soon as the trade deadline passed.@ByJayKing was first to report early this season that Kyrie spoke last summer with AD about the idea of teaming up in Boston. Kyrie and AD are friends, and Kyrie is AD’s main draw to Boston. https://t.co/EIBwpz0xDp
— Kevin O'Connor (@KevinOConnorNBA) February 16, 2019

To acquire Davis' services the Celts would potentially have to deal a lot, but if anyone is willing to make that gamble it is C's GM Danny Ainge. The chance to add a player like Davis doesn't happen often. The 25-year-old is averaging 23.9 points, 10.6 rebounds per game for his career.

Rob Welch2/16/2019 12:03:00 PM
Share
Rob Welch
I have been a die hard Celtics fan since birth, even though I don't really want to talk about the ML Carr/Rick Pitino Eras but I will if necessary.
Newer
Older