Why are the Celtics still wildly inconsistent approaching mid-season?


The worst part of Jaylen Brown's superior performance in Boston's New Years Eve defeat at the hands of the Spurs was that it essentially didn't matter. The Celtics lost - that did matter. Jaylen had been underachieving for most of this season but came alive in this one, scoring 30 points 67% from the field, 60% on threes and an out-of-character 88% on free throws. Gordon Hayward had a stinker, notching zero points in 21 minutes. 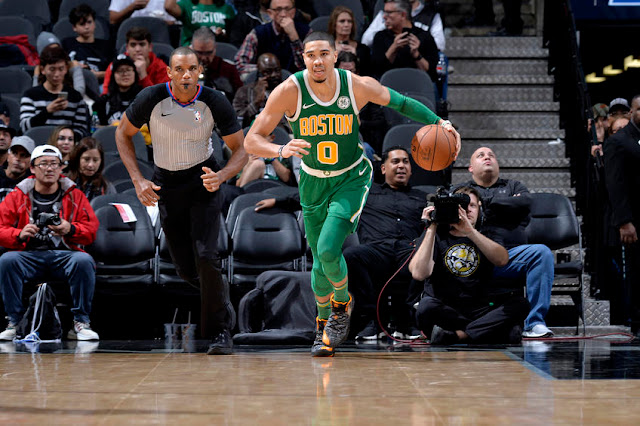 Every game something different clicks for the Cs but for some reason, they don’t happen all at the same time. I still choose to see it as encouraging, when (not if) the Cs figure it out and put them all together by the end of the reg season, they’ll be unstoppable come playoffs.

The Celtics couldn't throw the ball in the ocean from 3-point-land. Gordon Hayward, Jayson Tatum, Marcus Smart and Daniel Theis were a combined 0-for-13 from beyond the arc. Boston shot 32% on threes to San Antonio's 54%. The biggest blow, however, was that the Celtics could not match the Spurs' intensity in the third quarter. San Antonio poured in 46 points in the third period, a 25-year high for the team (per NBA's Raul Dominguez):

The Spurs made 19 of 25 shots (76 percent) in the third quarter and finished with its best period since 1993. It was their 12th-highest output of any quarter in franchise history and second-highest in the third.

''Seemed like they were just waiting in the weeds,'' said Kyrie Irving, who had 16 points and eight assists. ''I'm pretty sure Pop got in their rear ends and really told them play hard or you're not stepping on the floor and you just see that maximum level just go up and our level just stayed the same.''

So @Gary_Tanguay is at his breaking point with the Celtics. As midseason nears, why is this team still so damn unpredictable? Talking seesaw C's on Early Edition: pic.twitter.com/exZDYPvP0M

As a team, the Celtics have been wildly inconsistent. Kyrie irving and Marcus Morris have fulfilled expectations, and you might throw Marcus Smart into that mix (as Chris Forsberg did in the above tweet/video). But no one know what to expect from the rest of the roster on a night-to-night basis. The Celtics take on the Timberwolves tonight. Let's see who shows up.