Scary Terry Returns as the Celtics roll over the Cavaliers, 125-103 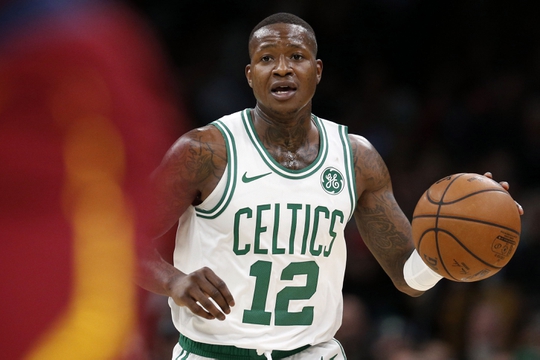 The shorthanded Boston Celtics rattled off their 10th-straight win at the TD Garden as they beat the Cleveland Cavaliers, 125-103. Kyrie Irving (flu) and Al Horford (rest) both missed the matchup but the C's had guys ready to step up. Terry Rozier had his finest performance this season as he tallied 26 points, 8 rebounds, and 6 assists as he carried the Celtics to victory. Jaylen Brown notched 22 points on 8/12 (2/3 from three) shooting to go along with 6 rebounds, while Gordon Hayward and Jayson Tatum chipped in 18 and 17 points respectively.

For the Cavs, Cedi Osman lead the team with 25 points and 8 rebounds. Ante Zizic had 19 points on 9/17 shooting with 8 rebounds as well.

Rozier came out swinging for the C's in the 1st half, looking every bit the Scary Terry we remember starting games last postseason. He opened the game a perfect 8 for 8 from the floor with 22 points before the break. He shot 4 for 4 from deep and showed off some dazzling slashes to the rim:

Rozier takes it to the rack and gets the and-one bucket! pic.twitter.com/olh0EOCQwQ
— Boston Celtics (@celtics) January 24, 2019

For the Cavs, our old pal Zizic was the hot hand early. He shot 7 for 10 for 14 first half points to go along with 4 rebounds, including 3 offensive boards to help keep Cleveland afloat, but they trailed by 15 at halftime after Rozier dropped in his 8th bucket at the buzzer from the parking lot:

The 2nd half was simply more of the same, as the Celtics essentially cruised to victory without allowing the Cavs so much as a sniff of contention. Robert Williams made his return to the lineup for the 1st time in over a week, and while he only logged just over 10 minutes in the game he did rack up a handful of highlight plays in the 2nd half:

Come for the Cav’s beatdown, stay for the Robert Williams highlights 😤 #Celtics pic.twitter.com/2NruVxZheX

The Celtics will get a couple of days off before they welcome the Golden State Warriors to the Garden this Saturday night for a prime time matchup with the defending champs.

Related: Grizzlies draft pick, owned by Celtics, may be getting more valuable