On Anthony Davis, Kyrie Irving, and uncertainty in the NBA


The NBA is something of a soap opera at times (OK, basically always), and we as fans invest a lot of time and energy into reading the proverbial tea leaves in the hopes of a leg up on what's about to go down with our favorite teams and players.

We tend to get too attached to the guys we have, while also managing to salivate over stars we (often) don't, and can be blindsided when discord or ill will seems to come out of the blue, only to realize in retrospect our fandom put blinders and earplugs on us for crucial, very obvious signs we convinced ourselves to miss. 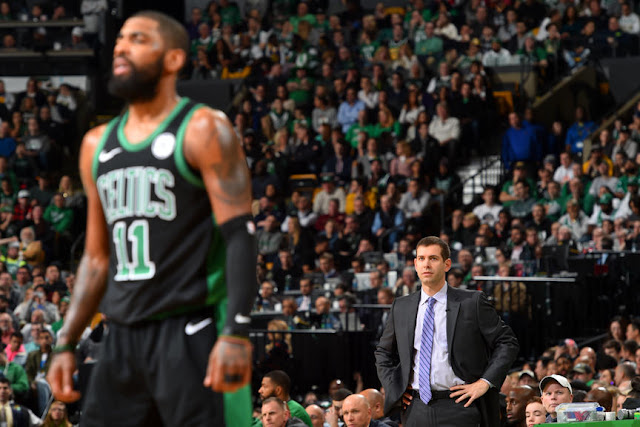 When our stars might leave - or others become available - such is a prime example of how those situations unfold, and when it comes to the league, information is power, a power often wielded brazenly in ways that challenge the limits of journalistic credibility.


David Aldridge: The Celtics are much more appealing to AD if Kyrie re-signs, but “if Irving isn’t there, it wouldn’t definitely be a deal-killer to Davis staying in Boston, from what I hear.” https://t.co/aBuRsdOkEJ
— Tom Westerholm (@Tom_NBA) January 28, 2019

What I mean by this is a few things, which I am going to share with you as we all try to wade through "what's really going on" with Anthony Davis' trade request, Kyrie Irving's likelihood to re-sign with the Boston Celtics, and any other pertinent tidbits flitting about the NBA media sphere.

Communication in any context has a few key elements: A source or sources, which may also be the author though not always; the aforementioned author, intellectually speaking as well as practically, which, as with the source, are not always the same individual or group, an intended effect (this can take the shape of multiple reactions, but all are part of the original intent), the actual effect, and a medium (how the communication is transmitted).


Look, I have no idea who what sources are. But you DO have to ask yourself

“What person close to AD would benefit the most from AD NOT going to the Celtics and instead the Pelicans having no better option than the Lakers?”

All of these parts should be considered in the context of "Why this", "Why here", "Why them", and "Why now", using the best available knowledge you can muster concerning the logics and contexts at play to truly dig into a narrative and its intentions.

We have seen in recent years that the motives behind re-signing for players is highly subjective, and capable of turning on a dime in some cases. Because of that, we can only take a player's word as a word - responsible team building doesn't revolve around handshakes - it requires contracts.


Considering that the Celtics couldn't trade for AD until after Kyrie has functionally made up his mind, I don't see how being unsure if Kyrie wants to stay would actually be relevant to the Celtics acquiring AD.

We have also seen a flurry of media circulating from sources with ties to the Los Angeles Lakers and LeBron James' camps ranging from cute videos from James to Irving to accounts Davis prefers the Lakers and may not resign in Boston to rumors Kyrie himself may be changing his mind about re-signing with the Cs.

Remember, writers rely on relationships with agents to eat.

Do your homework. The receipts are out there. Who benefits from these messages, and why are they coming up now?

It's very clear the New Orleans Pelicans are not keen to deal with the Lake Show to the point of requesting the league enforces tampering rules, that their best-available package may not even be as good as multiple dark horse candidates worse off than Boston, and that Boston, unable to deal for Davis until summer because of Collective Bargaining Agreement rules, would likely crush any offer and remain a legitimate contender immediately.

Did I mention the Pels have communicated they wish to wait until summer?


New Orleans Pelicans statement, stripped of politeness: "This is crap. This whole thing has been orchestrated by Klutch, and the league's not going to do a damn thing about it, so we're going to take our sweet-ass time and do everything we can not to send him to LA immediately."
— Fulham's 6th leading scorer (@AndyGlockner) January 28, 2019

I'm not going to tell you what to think, but I hope I gave you some tools to better make your own case for how Danny Ainge's next moves. The man's legacy is on the clock, and despite irking me and likely you more than once in our fandom, I trust the man to shepherd one of the greatest franchise in history's most important moments.