Love him or hate him, Marcus Smart is never boring. With a jump ball about to happen at the 7:35 mark of the third period, Marcus and DeAndre Bembry got into a pissing contest - both received technicals - and Smart was ejected due to a previous technical earlier. Smart then went after Bembry like he was shot from a gun. 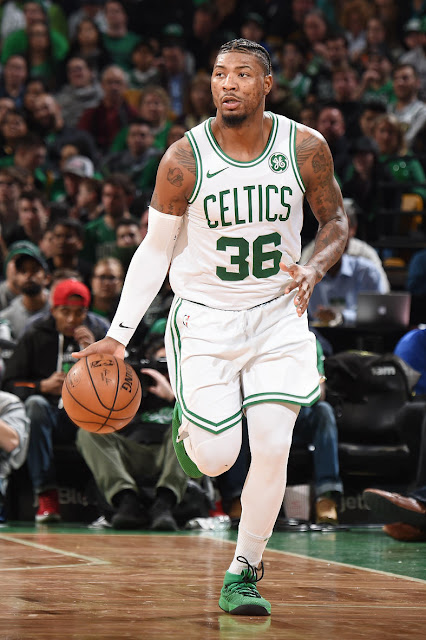 Marcus Smart and DeAndre' Bembry get chippy in the game. Smart gets ejected (@AAANe_MAnews) #AAANortheast pic.twitter.com/lqUSReOldI

If this basketball thing doesn’t work out, Jayson Tatum can go into security. That’s twice this season he’s prevented Marcus Smart from getting to a player on the court (see also: JR Smith)

Jayson Tatum has a number of roles on the Celtics, and one of them seems to be corralling Smart when Marcus goes on a rampage. Jayson didn't have to take him to ground like the J. R. Smith episode, but Tatum moved quickly nonetheless.

Speaking of corralling, Smart needs to exert some self-control. I am sure he will hear from the League on this one, and he doesn't really need a DeMarcus Cousins reputation with the refs. Smart is vital to any Title hopes, and he won't be of any help when under any future suspensions. What would his late mom, Camelia, have to say to him. "Calm your ass down" is what I am hearing!